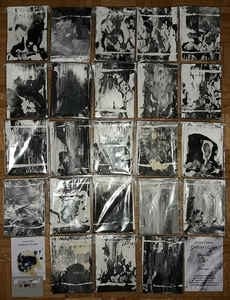 Background/Info: This is the third album for the Italian project Empty Chalice. “Ondine’s Curse” is ‘a rare sleep disorder that causes alveolar hypoventilation, convulsions, cyanosis and even personality disorders’. The tracks have been composed for the conceptual series set up by the Italian label Ho.Gravi.Malattie and based upon serious diseases that might affect the population.

Content: The disease have been transposed into a dark music experience, which is mixing field recordings, tormented guitar playing, metal percussion parts and dark-ambient music. The album features 4 cuts.

+ + + : Empty Chalice reveals a noticeable evolution from a rather noise-like debut work towards a more dark-ambient next work. “Ondine’s Curse” more sounds in the line of the previous work (cf. “Emerging Is Submerging – The Evil”) while accentuating some ritual elements. I especially like both debut cuts, which are the most tormented ones. Empty Chalice has used an impressive noise arsenal to accomplish this work, which is without a shadow of a doubt the most mature one.

– – – : I already mentioned the remarkable debut cuts so it’s just a pity that the other tracks left can’t convince me a similar way. They’re less obscure and even revealing dark, evasive passages.

Conclusion: This is an album with two sides and two faces: a great and inspired A-side featuring 3 cuts and a more average-like B-side featuring 2 other cuts.