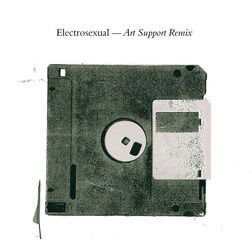 Background/Info: Romain Frequency aka ‘Electrosexual’ strikes back with a new EP featuring 13 remixes. The work is based on the debut album “Art Support Machine”, which was released during 2014 on Rock Machine Records. Notice by the way that Romain Frequency last year also released a debut-album for his new project Dear Strange, which remains to me one of the best surprises of the past year.

Content: Multiple songs from “Art Support Machine” have been remixed by a fine and qualitative selection of artists. If you’re a bit familiar with the most sophisticated techno fields you for sure will be excited to know that artists like David Carretta, Mondowski, People Theatre (Peter Rainman), Millimetric, Workerpoor ao contributed to this EP.

The different artists have tried to put their own stamp and influence to the original songs, which resulted in a varied, but mainly danceable and somewhat groovy production. The remixes move from minimal electro-techno music to nu-disco to great vintage electronics to techno-body to danceable grooves to pure minimalism.

+ + + : There’re multiple noticeable remixes featured on this EP and the diversity of the songs is absolutely great. The remixers have accomplished a great job, which consists of mainly high-danceable versions.

Conclusion: The remixes add a real bonus to the original songs and album. I guess it also confirms the talent of Romain Frequency who inspired great bands to accomplish cool remixes.