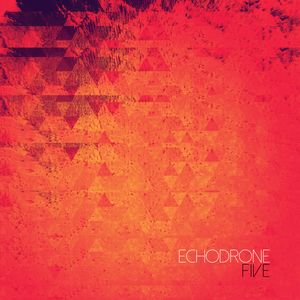 Content: “Five” stands for the 5th release of Echodrone while it also refers to the 5 members of the band. After the self-released debut album “The Sun Rose In A Different Place” (2009) this new work also marks their debut at shoegaze-devoted Saint Marie Records. “Five” also marks the debut of a ‘new’ era as 3 new members joined in to compose this work.

Echodrone defines their work as ‘shutgetoronika’, which is probably one of the most original descriptions I’ve heard in years. “Five” finds its main inspiration in the purest realms of shoegaze music, but elements of dream-pop and rock music can be heard as well. The work reveals an open-minded approach based on rather soft shoegaze influences achieved with electronic arrangements while sweet –and sometimes fragile-like vocals hang over the songs.

There’s a kind of duality between the shoegaze passages and the dream-pop style. The verses are often sweet and into dream-pop music while the choruses become heavier and shoegaze driven. “Noisebed” is a very efficient and noticeable song in the genre. The ‘sweet’ side of the song is also accentuated by the female vocals. Talking about the vocals I’ve to say that I like the duo parts between male- and female vocals parts. Both singers are really complementary injecting a magical touch to the opus. “Motion Pictures” perfectly illustrates this symbiotic sensation between both singers.

About the main attention grabbers, I want to mention the somewhat Cocteau Twins evoking, “Less Than Imaginary.” I was impressed by the progression of the song, which is an aspect that comes back on, “Chrome.” This is a great piece of music where the different influences of Echodrone merge in a real enlightening way. There’s a real classical shoegaze-like guitar wall carrying this song while the electronic parts deliver a real sad input. This is the kind of song that would totally fit as a soundtrack. Last, but not least the final track “Octopussy” is also a fascinating piece of music where the band again displays their writing skills.

Conclusion: Some of the songs at the beginning of the album are a hesitant, although some of them can be considered major tracks, however the final part of the album is absolutely magnificent. This album reveals a perfect balance between shoegaze and electro-dream-pop.