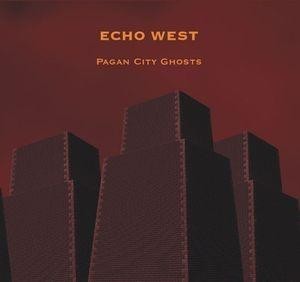 Background/Info: This album was released during the first half of 2015, but is an irresistible piece of music by the Dortmund (Germany)-based Echo West. “Pagan City Ghosts” is their 7th album to date and the 2nd in the “Pagan City”-trilogy, which started with “Pagan City Gods”.

Content: Dirk Torben Klein is a talented, but often underestimated sonic craftsman who brings vintage electronics back to life. The vintage electronic treatments bring us back to the early years of electronic music reminding me of an imaginary hybrid between Absolute Body Control, Portion Control and Fad Gadget. “Pagan City Ghosts” is awakening old electronic spirits of the 80s made by rhythm box and icy noise manipulations. The songs have been accomplished by freaky sweeps and multiple effects.

The production of the vocals is another ingredient reminding me of the 80s. The echoing and somewhat sterile vocals match with the icy sequences. Echo West is not exactly composing ‘feel-good’ music and yet it sounds delightful.

The sound formula is quite easy, but efficient. “Pagan City Ghosts” reveals a succession of great compositions and will definitely appeal for all 80s dark-electro lovers. Notice by the way that this work also features a remix of “Are We City Humans”. The original version originally appeared at the “Pagan City Gods”-album.

– – – : I can’t explain why such a genius band has never gain more recognition!

Conclusion: “Pagan City Ghosts” smells like an unknown treasure that has been finally introduced to the world.