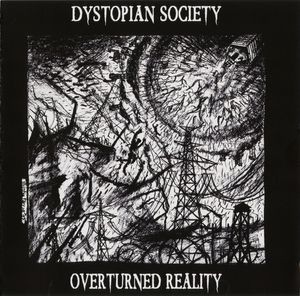 Content: Dystopian Society is based in one of the most historical places of the renaissance (Firenze). The duo Max Skam and Sara Hexe have already released a few productions, but have now joined Danse Macabre to release their 2nd official studio album featuring 9 songs.

The sound of Dystopian Society is a kind of look back to the glorious days of post-punk and cold-wave music. They’ve emulated this truly spirit reminding me of legendary formations in the genre becoming idols of the 80s and the future generations. This album evokes to me distant souvenirs from bands like The Virgin Prunes, Christian Death and even our Belgian Red Zebra.

The moody atmosphere hanging over the songs deliver a dark composition, which is constantly moving in between new/cold-wave and post-punk. The deep timbre of voice of singer Max totally matches with the punkish guitar riffs and dynamic rhythms. Notice by the way that Sara is playing guitar and the drums.

The lyrical themes deals with the good-old themes of malaise that we were used to hearing during the dark era of the 80s. “Overturned Reality” is an album that would have got its success during that period, but it will also fullfill the expectations of nostalgic fans.

My only regret is the short tracklist only featuring 9 songs for a total duration time of 30 minutes. But here again it’s a formula that was rather familiar during the 80s and I personally prefer 30 minutes of great music instead of an endless tracklist without a climax.

Conclusion: If you don’t yet know Dystopian Society I’ll fully encourage you to discover this excellent “Overturned Reality”, which sounds like you suddenly awoke in the midst of the 80s.

Since you’re here … … we have a small favour to ask. More people are reading Side-Line Magazine than ever but advertising revenues across the media are falling fast. And unlike many news organisations, we haven’t put up a paywall – we want to keep our journalism as open as we can. So you can see why we need to ask for your help. Side-Line’s independent journalism takes a lot of time, money and hard work to produce. But we do it because we want to push the artists we like and who are equally fighting to survive. If everyone who reads our reporting, who likes it, helps fund it, our future would be much more secure. For as little as 5 US$, you can support Side-Line Magazine – and it only takes a minute. Thank you. The donations are safely powered by Paypal.
Tags: Dystopian Society