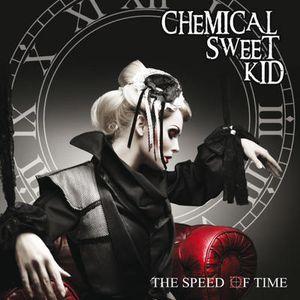 Content: Chemical Sweet Kid strikes back after a hiatus of 3 years. Mastermind Julien Kidam took the time to explore new musical ideas, which is an element that you’ll immediately notice during the listening.

I’m not saying that Chemical Sweet Kid reinvented its initial sound, but you clearly perceive an evolution from the debut album “Tears Of Pain” (which was more electro-minded) to “Broken Wings” (which clearly revealed a more explicit industrial-rock approach) to the new work.

The French band is mixing influences like it all is a simple game, but it’s not that easy to find a coherence between electronics and guitar covering multiple genres like dark-electro, industrial, rock and even punk.

Julien Kidam always took care for the artistic aspect, which comes through in the global image of the band and the illustration of the artwork, but it also is an element that you clearly will recognize in the writing of this work. The songs are perfectly accomplished by great arrangements joining the harder guitar playing. I sometimes get the impression that the dark and disturbing universe –which comes through in the lyrical aspect, has been enlightened by a subtle and global production process.

It’s quite confusing when you consider that punk- and industrial elements became refined and threatened by some artistic elegance. “The Speed Of Time” has been announced as the most accomplished work of the band, which is a statement I totally agree with, but more than this I think it also is the most intimate work of the band ever.

I get the impression that this release is hiding a kind of conceptual theme, which makes me think of sci-fi and horror themes, maybe leading me to the world of Lovecraft or King. “Precious Time” is one of the songs evoking this imaginary ‘haunted house’ impression, but musically it also is a successful mix between punk-rock and EBM-minded electronics. The refined element comes through on “The Next Chapter” featuring delicious violin-like electro arrangements on top of a hard driven punk-rock song.

If there’s just one regret I can say about this work, it for sure will be the absence of a real hit song, which always gives an extra dimension to an album.

Conclusion: What I like in this band and this new work is the personal approach in sound and writing. Chemical Sweet Kid doesn’t really belong to an established music genre, but simply covers different influences to create a strange, but exciting sonic alien.

Best songs: “Precious Time”, “The Next Chapter”, “No Emotion”.