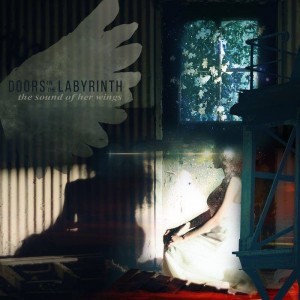 This EP looks more like a mini-album featuring 5 songs.

Content: The opening cut is a rather mysterious and somewhat Dead Can Dance influenced piece of music featuring male vocals. The next tracks move in new-wave inspired music and are carried by 80s like, mewing guitar parts, which will for sure remind me of some famous new-wave formations.

The sound is more a kind of music to listen to, which must be for sure inspired by the film-composer career of the artist. It’s a doomy new-wave format with evasive passages. Some of the arrangements are a little bit bombast while the work also reveals some psychedelic passages.

The vocals move in between spooky, somewhat whispering passages and more passionate parts.

+ + + : Doors In The Labyrinth might be inspired by famous new-wave bands, but doesn’t sound at all like a copyist. I like the personal approach and gothic interpretation, which is carried by soundtrack inspiration. It’s not exactly the kind of music leading me into ecstasy, but there are some really beautiful songs featured.

– – – : I get the impression that this is not the kind of music that has been composed for ‘wider masses’. It sounds more intimate and therefore maybe not accessible for a wider audience. The EP features cool songs, but unfortunately no real climax.

Conclusion: “The Sound Of Her Wings” stands for a moody and melancholic voyage made of new-wave/gothic inspired elements on one side and wafting, soundtrack passages on the other. This is dark music to relax to.

Best songs: “The Sound Of Her Wings”, “The Garden In Vastarien”.

Since you’re here … … we have a small favour to ask. More people are reading Side-Line Magazine than ever but advertising revenues across the media are falling fast. And unlike many news organisations, we haven’t put up a paywall – we want to keep our journalism as open as we can. So you can see why we need to ask for your help. Side-Line’s independent journalism takes a lot of time, money and hard work to produce. But we do it because we want to push the artists we like and who are equally fighting to survive. If everyone who reads our reporting, who likes it, helps fund it, our future would be much more secure. For as little as 5 US$, you can support Side-Line Magazine – and it only takes a minute. Thank you. The donations are safely powered by Paypal.
Tags: Doors In The Labyrinth