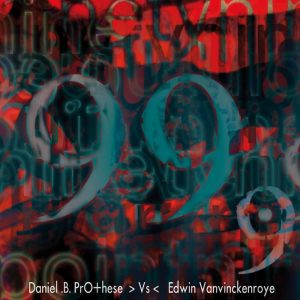 Background/Info: Daniel B. went through a very prolific process. He last year released new stuff with Nothing But Noise and took off this year with the new Prothèse album “CHZWaaR+ZMe+aaL”. Released nearly at the same time comes this new opus as a collaboration with Edwin Vanvinckenroye (who has been involved with Troissoeur and The Tribe Band).

Content: Daniel B is experimenting with sounds and creating noises while Edwin Vanvinckenroye is playing violin and singing. The work features 11 tracks (the digital format features one more cut), which are starting with bombastic drums and a kind of post-apocalyptic sound experiment. Quite progressively the tracks are moving into wafting passages still carried by bombast and heavy sound treatments. The violin playing has been overload by effects creating heavy sound effects, which sometimes are closer to guitar instead of violin. The vocals add a haunting touch to the work.

+ + + : “99.9” is an atypical work, which sounds more extreme than “CHZWaaR+ZMe+aaL”. The tracks are getting different influences together while carried by heavy bombast. Daniel B. sounds like lost in an electronic ‘freestyle’. He however remains a genius when it comes to create alluring bass lines and a truly sound surgeon when dissecting sounds to reduce them to noise. Edwin Vanvinckenroye injects this post-apocalyptic element, which perfectly matches with the electronic approach of the work.

– – – : This is the kind of album you can only, but like if you’re a fanatic lover of extreme experiments in sounds. It’s not the most accessible album and clearly not the kind of work that will be liked by the Front 242 die-hard fans.

Conclusion: “99.9” sounds unpolished and deeply experimental, reminding me a bit to the early 80s ‘anti-music’ approach from the ‘industrialists’. That’s why this album is the perfect antidote to fashion trends, but I’m not this ‘sonic serum’ will appeal for a wider audience.