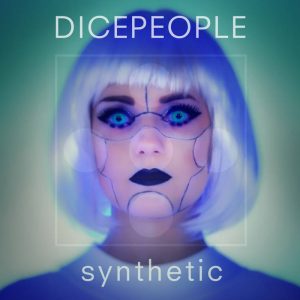 Background/Info: London based formation Dicepeople is already active since a couple of years now. Set up and driven by Matt Brock (music & production) plus Atashi Tada (vocals) and Rafael Filomeno (visual artist) Dicepeople have already released some promising releases.

Content: This new work reveals the title song plus 3 remixes. “Synthetic” is a cool electro/space-pop song featuring great robotic effects on the vocals. The track is danceable, melodic while carried by a bombastic drum section and some guitar play.

The remixes are adding an interesting diversity. The “Ventenner Remix” is more aggressive while the “Little Death Machine Remix” is driven by a slow tempo, which extra accentuates the deep, vibrating tones while the vocals are fragmented. Last, but not least there’s the more sophisticated “Pneumatic Mix”.

+ + + : I especially like the title song plus the Pneumatic Mix (by Dicepeople). Both versions confirm the band’s potential. It’s really fascinating observing the move from the pure electro-pop driven “Synthetic” to the sophisticated “Pneumatic Mix”, which even reminds me a bit of Lassigue Bendthaus. I’ve been also impressed by the great effects they put on the vocals.

– – – : I just regret there are no other original songs featured on this production, but in the end it’s an EP. Up to a new album guys!

Conclusion: “Synthetic” is a cool song, which will appeal for electro-pop lovers while the remixes are injecting an interesting diversity.