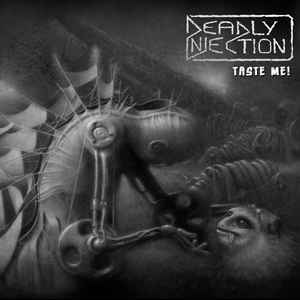 Background/Info: “Taste Me!” is the debut album of the German EBM-duo Deadly Injection. They were previously featured on a few compilations and now joined hands with EK Product to unleash this opus featuring 13 tracks.

Content: “Taste Me!” is an album without any form of pretention. It’s pure old-school EBM music with a clear hardcore flavor on top of several songs. The songs clearly remind me of the 90s and especially of Leather Strip for some of the bass lines and early Cat Rapes Dog for the fast tempo and harsh production. The vocals are a little bit distorted, which is perfectly matching with the rough sound production.

+ + + : If you’re a die-hard fan and you’re still convinced the best EBM was composed during the 80s and 90s you definitely have to discover Deadly Injection. The hardcore touch injects a real punching touch to the work. I especially like the songs, which are a little bit more elaborated with good-old string parts.

– – – : Good EBM and especially the ‘hardcore’ class is often simple and efficient, but I think a little bit more elaboration –especially for some of the choruses, would be a real bonus.

Conclusion: This debut album sounds like a ‘start’. Deadly Injection has found their style and influences, which are cool, but they now have to improve some elements of the production.