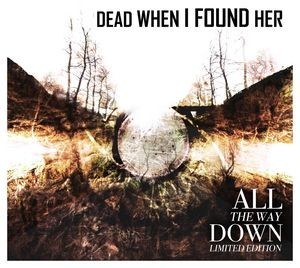 Content: Dead When I Found Her unleashes its 3rd full length album, which features 10 new songs plus a bonus disc (for the limited edition) with 6 extra songs.

Michael Arthur Holloway progressively becomes a real reference when it comes to speaking about intelligent electronic acts. This is not a stereotypical dark-electro formation getting the title of x-cheap emulation of an established band. “All The Way Down” confirms a sophisticated approach in writing and a great mixture of influences.

I don’t want to make any real comparison, but if you can imagine a hybrid between the evasive, icy sound of Haujobb, the complexity and industrial electro sounds of Skinny Puppy and the astral-pop style plus a similar way of singing as Mind.In.A.Box you’ll get an idea about this album.

“All The Way Down” is a perfect sonic balance between different elements, but where complexity remains fully accessible. Holloway composed a kind of sonic enigma, which is hard to decipher, but easy to listen. The work takes off a rather electro-rock way evolving into a complex cinematographic composition taking the listener in a dense sonic web for more than 6 minutes. “The Unclean” coming up next is quite different revealing a short and bombastic cut with samplings. The contrast between both songs already shows the eclecticism and impressive sound arsenal of this work.

Things progressively get more and more fascinating with the kind of space-like atmospheres upholding the songs with an icy blast. “Downpour” is an absolute masterpiece in the genre, but I also have to mention “Misericordia” for its beautiful sound treatments and intriguing choir parts while the vocals remind me of Stefan Poiss (Mind.In.A.Box).

“Blood Lesson” is one more song to pay attention to and I here got the impression of embarking on an apocalyptic-pop voyage mixing wafting atmospheres and beautiful sound sculptures.

The album finally comes to end a rather dreamy way. The sound comes pretty close to a real soundtrack experience at “The Noise Above Us” while there’s no better- and appropriated title than “At Rest” to bring this work to an end.

The extra disc features 6 songs, which you really have to discover. The limited edition of this album is a must have. The songs are a bit more danceable and harder while holding on to their main sources of inspiration, but they simply are beautiful songs as well.

The hardest cut probably is “Spitting Seeds”, which comes close to a kind of terror-electro creation. This is the kind of song that will more appeal for the real dark-electro heads. The most surprising song and yet one of the absolute attention grabbers is a cover version of Ministry’s “You Know What You Are”. This song is a kind of challenge as covering Ministry might be considered as a blasphemous exercise, but Michael Arthur Holloway did it with bombast and intelligence like injecting a new life to this legendary, early hit of Ministry.

The opening song “New Drugs” is one more noticeable song, which is a bit more into EBM. Last, but not least I also have to mention “So Cold” for its familiar complexity and brutal guitar riffs.

Conclusion: This album already got a very positive reaction and I can only, but agree that Dead When I Found Her has accomplished a brilliant opus. It’s not the most accessible song in the genre, but this is not electronic music for dummies, but for music lovers in search of creative, artistic minds.

Best songs: “Downpour”, “Misericordia”, “Bloodlesson”, “Threadbare”, “The Noise Above Us” + “Spitting Seeds”, “You Know What You Are”.

Since you’re here … … we have a small favour to ask. More people are reading Side-Line Magazine than ever but advertising revenues across the media are falling fast. And unlike many news organisations, we haven’t put up a paywall – we want to keep our journalism as open as we can. So you can see why we need to ask for your help. Side-Line’s independent journalism takes a lot of time, money and hard work to produce. But we do it because we want to push the artists we like and who are equally fighting to survive. If everyone who reads our reporting, who likes it, helps fund it, our future would be much more secure. For as little as 5 US$, you can support Side-Line Magazine – and it only takes a minute. Thank you. The donations are safely powered by Paypal.
Tags: Dead When I Found Her