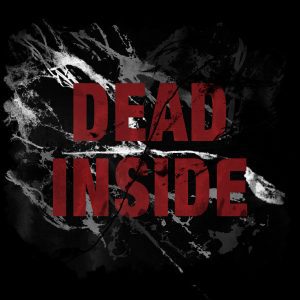 Background/Info: Dead Inside is a new formation hailing from Italy unleashing their debut work on Danse Macabre.

Content: The influences running through this work are moving from rock, to gothic, to metal. There clearly is a solid 80s influence hanging over the songs and mainly emerging from the guitar playing. I sometimes get the impression of listening to a crossover between The Sisters Of Mercy and The Birthday Party with vocals reminding me of Peter Murphy. The guitar playing is a real essential aspect of the work.

+ + + : I especially like the 80s spirit of the album, which is mainly emerging from the guitar parts. And the guitar is not only the dominating instrument from the album, but one of the band’s main strengths. I here refer to the sorrow-like play at “Close” or “Blackness” reminding me of early The Birthday Party while “Lamp” has something Sisters Of Mercy-like. But don’t expect to get a cheap copy of famous 80s new-wave legends as Dead Inside also has something more personal and contemporary. The powerful vocals bring some passion to the work.

– – – : “Dead Inside” is a noticeable debut with multiple cool songs, but maybe missing high lights.

Conclusion: Dead Inside doesn’t bring anything new –and could even have taken another band name as this one is quite common, but it’s an honest debut album.