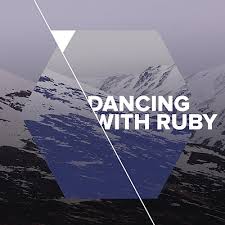 Content: Dancing With Ruby is a very interesting discovery in the wider fields of electro-pop music. The duo consists of Matt Culpin and Charlie Sanderson.

From the very first notes you’ll notice the explicit electro-pop flavor emerging from the composition. The sound is made with cool electronic treatments, a low sounding bass line and delicate arrangements, which totally match with the dreamy vocals of singer Charlie Sanderson. She injects some part of fragility to the work, which makes it all sound sensitive and delicate.

There are many influences running through the sound, which sometimes brings us back to the golden 80s. Just pay attention for some vintage passages (like at “Orchestrated Honesty”), which might remind you of Depeche Mode. One of the most noticeable songs appears to be “Becoming Undone” for its somewhat Kraftwerk-ian pop style. Here again the song is carried by a solid and deep sounding bass line. Several songs also reveal a kind of space-like atmosphere, which together with the beauty of the vocals elevate the sound.

This is an album to dream away to although it remains danceable as well. Some of the songs are carried by a harder kick, which can be also a bit retro-like as well (cf. “Nightmare”). I was also caught by the emotional-sounding “Still Waters”, which reveals a touch of experimental-pop and reminds me a bit of Björk. There’s a lot to experience with this work and I also have to tip the somewhat darker-like “Hold Everything Dear” and the final song “Dance Move Feel”, which is without a shadow of a doubt the most catchy and poppy song of the tracklist.

If I had to imagine one single minus point about this work I would say that the songs are maybe a little bit too short, which simply reveals that you never get bored when listening to this release.

Conclusion: Dancing With Ruby is a new and fascinating formation that will please electro-pop fans. This album is a great success.