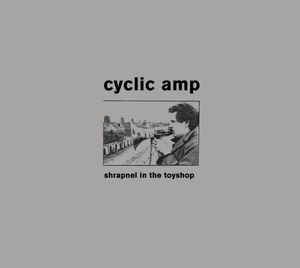 Background/Info: Cyclic Amp was a UK band active during the 80s and mainly dealt with post-punk music. They released several productions mostly in between 1986 and 1989. The mini-LP “Ugly As Power” (1987), the LP “People Of The Book” (1988) on the first disc and the 12” Concrete Island (1989) plus the cassette “Happy Ending” (1986) on the second disc have been brought back to life through this double CD released on Final Muzik.

Content: I honestly can’t remember to have ever heard of Cyclic Amp, but these 30 songs are a perfect opportunity to discover this formation. The tracks” from “Ugly As Power” clearly sound into the post-punk style, but also into new-wave as well. A few tracks remind me a bit of the power of Red Lorry Yellow Lorry, but also to an unpolished and dirty version of The Stooges. The songs are dark and tough and sometimes a bit fuzzy-like, which makes me think of some early shoegaze productions.

“People Of The Book” was more into a harder and apocalyptic format mixing elements of punk together with industrial music. A few songs remind me a bit of early Buthole Surfers songs.

Similar influences moving from punk to industrial-rock and shoegaze can be noticed on “Concrete Island” as well while their early work featured on “Happy Ending” maybe was the most special and visionary one. The influences are quite similar, but we also can hear more electronic passages, which are more into early Cabaret Voltaire. Most of these songs are demos and live versions.

+ + + : Recovering a forgotten 80s band from dust will always please old fans of the band, but also provides the opportunity for others to discover a forgotten treasure. This album will give you a real good idea about Cyclic Amp, which clearly has composed a few great cuts. I like their power and post-punk attitude, and also some of their more chaotic shoegaze inspired songs and especially the ones with some electronics on top.

– – – : This album for sure features a few cool songs, but globally speaking Cyclic Amp definitely did not have the potential to compete with the UK tenors from new-wave and post-punk. It’s quite strange, but I prefer some of the demo songs to the original versions!