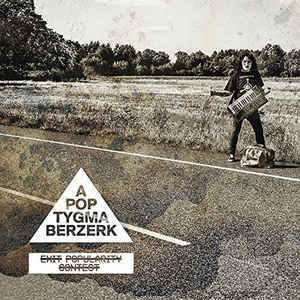 Background/Info: Apoptygma Berzerk is a band that doesn’t need any further introduction. Founded by Stefan Groth in the late 80s this Norwegian formation rapidly became one of the absolute leading formations of EBM and later on electro-pop, but in the end I would say it has never been easy to define the real style of Apoptygma Berzerk. “Exit Popularity Contest” is not exactly a new album although a full length with reworked versions of the songs featured on their 3 last EP’s “Stop Feeding The Beast” (2014), “Videodrome” (2015) and  “Xenogenesis” (2016). Notice by the way that this album is not available on digital format!

Content: This is an album that smells like pure vintage electronic music. It sounds pretty astral-like revealing an electro-ambient style made with analog gear. You easily recognize the typical arrangements and melody lines of Apoptygma Berzerk, but still a kind of wink to early pioneers like Jean-Michel Jarre and Kraftwerk.

The instrumental format of the songs even creates a cinematographic approach although all the songs are perfectly danceable. This work stands for pure synthesizer music and reveals several attention grabbers.

+ + + : It’s been quite a long time ago since we’ve gotten a new full length album by Apoptygma Berzerk and even if this album is not exactly a real new work, I can assure you it definitely sounds that way. It also is a kind of back to basics; pure vintage electronic arrangements carried by impressive melody lines and genius arrangements. It sometimes moves on the edge of experimentalism, but always remains accessible. The instrumental format –with the exception of the final song, never hurts and even accentuates the vintage approach of the songs.

– – – : I can imagine some fans will miss the more poppy-side of this band and especially the vocals of Stefan Groth. It’s probably one of the most experimental albums of Apoptygma Berzerk.

Conclusion: I’m totally fond of this vintage format bringing us back to the essence of electronic music, but also revealing the great, creative spirit of this artist.

Best songs: “For Now We See Through A Glass, Darkly”, “In A World Of Locked Rooms”, “U.T.E.O.T.W. (Instrumental)”, “The Genesis 6 Experiment”, “The Devil Pays In Counterfeit Money”.