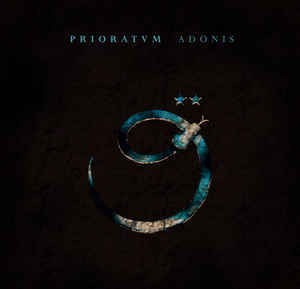 Background/Info: Prioratvm is an Italian solo-project set up in 2007 by Mirko B. A debut album “Those Who Linger” was released in 2013 while a few EP’s have been released as well. The band has been inspired by the legendary and occult Sion organization, which also reveals the sound influence of this project.

Content: The dark cinematographic style is easily recognizable and sounds a bit like the guideline running through the album. The compositions have been filled with mysterious sound moods, which sometimes remind me of Dead Can Dance, but the acoustic guitar playing also injects a vague neo-folk input.

The work is evasive, but often intriguing and even moving towards some ritual passages, which can be accentuated by some piano playing. A few tracks feature guest vocals and I especially notice the somewhat ethereal sounding “Dîdusch”. Another cut moves into some baroque inspiration, which is created by organ sounds.

+ + + : “Adonis” is a work revealing multiple influences, which are often into a soundtrack approach, but also accomplished with elements like ritual music, dark-ambient and even ethereal. I like the intriguing atmospheres hanging over a few cuts and especially masterpieces like “Adonis” and “Dîdusch”.

– – – : I personally regret there are no more ethereal inspired songs featured on this album. The heavenly voices passages create an extra and transcendental dimension, which is an element the artist might consider on his future work.

Conclusion: “Adonis” is a dark soundtrack awakening fantasies, which during the ritual passages of the work will lead you into a state of trance.