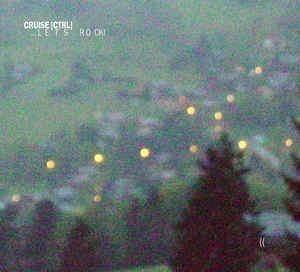 Background/Info: Set up by John C and Gore we welcome the 4th album of this Belgian duo. “Let’s Rock” reveals 8 songs inspired by the mythology of Twin Peaks.

Content: Cruise [Ctrl] remains one of the best kept secrets of the Belgian underground scene. I’m not saying that the band is totally unknown, but we have to admit it’s not exactly the most familiar and praised band from the scene. And that’s a real shame as their previous work revealed an impressive minimal and somewhat IDM minded approach.

“Let’s Rock!” is not that different and yet more into experimental treatments. I got the feeling the duo has experimented more with sounds and noises becoming real noise architects creating a kind of avant-garde like sound. The work remains an imaginary sound bridge between electronic minimalism and industrial music. A few more influences moving from IDM to experimental techno can be noticed as well.

The tracks are mainly based on repetitive, icy sound loops and an impressive arsenal of noises and other manipulations. The cadence is rather linear, but injecting a real accessible element to the work. All the songs are instrumental, which simply accentuate the minimal approach of the production.

+ + + : The minimal and more explicit experimental creation is absolutely worthy of examination. Cruise [Ctrl] might remind you of a contemporary version of Suicide, but in the end I would say that this band is not comparable to any other although they would for sure appeal to lovers of labels like Tympanik Audio and Hands.

– – – : I’m missing the electronic exposure of the past albums, which was more diverse and elaborate. This album clearly evolves in sound and especially noise influences. I also regret there’s no single track with vocals and/or spoken samplings like the great experiment they did on their previous album with Dirk Ivens on vocals.

Conclusion: “Let’s Rock” clearly is not my favorite album of Cruise [Ctrl] , but it remains a fascinating and pretty cool work characterized by impressive sound treatments and a fine taste for experimental electro music.