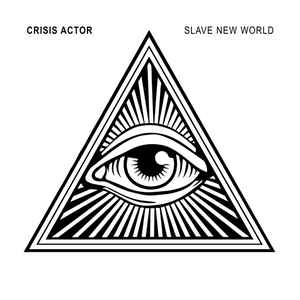 Background/Info: Crisis Actor is the meeting between David Thrussell (Snog, Black Lung…) and Tony D’Oporto (mainly known from Gnome and Gnomes of Kush). Both musicians previously released 2 digital EP’s and now unleash their debut album featuring 10 tracks on Ant-Zen. Crisis Actor introduces their work as ‘a conspiracy of two dedicated to bringing the hard truth to the people through the vehicle of art and music.’ It all seems as the shadow of George Orwell is hanging over this work.

Content: From the very first notes “Slave New World” reveals a minimal-electronic approach carried by EBM-orientated bass lines, technoid elements, space-like atmospheres and a Kraftwerk-flavor hanging over a few cuts. It’s a modern approach of electronic music revealing the sound intelligence of both artists. I don’t want to  compare Crisis Actor to Snog, but there clearly is a link in the way the songs have been worked out. The spooky vocal parts perfectly fit the sound.

+ + + : Crisis Actor took me by surprise by a refreshing composition. This is neither a new EBM emulation nor a cheap techno production. “Slave New World” (I like the title) reveals a simple, but efficient sound formula, which has been accomplished with knowledge and a truly passion for electronic music. It in a way is an answer to all bands without a real spirit sounding similar to each other. From technoid beats and arrangements to dark atmospheres carried by effects and sweeps to solid bass lines to subtle bleeps to the unavoidable spooky vocals of David Thrussell, this album is a real accomplishment. It resulted in several noticeable cuts.

– – – : Those who already discovered previous productions (cf. “Superstar” and “Electronic Eye”) will have to rediscover these songs. You don’t hear me complaining!

Conclusion: Crisis Actor stands for an intelligent, efficient and refreshing music production with a sharp and critical perception of our society and the world we’re living in.