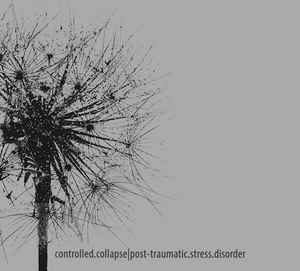 Background/Info: Set up in 2003 Polish formation Controlled Collapse got some instant recognition releasing their debut album (cf. “Injection”) on Dependent Records (2007). The next albums were released on Alchera Visions. The band is not releasing new work on regular basis while mastermind  ‘Kr-lik’ last year released a phenomenal work under the Clicks moniker. Controlled Collapse is now back on track unleashing their fourth album.

Content: I wouldn’t say that the sound of Controlled Collapse has seriously changed throughout the years, but there’s a kind of ‘natural’ evolution, which has seriously boosted the global production. From amazing electronic blasts and EBM influences towards heavy guitar riffs on the edge of metal, “Post-Traumatic Stress Disorder” sounds as a modern industrial electro release.

The harder cuts remind me a bit of Combichrist, but on the other side there always is this EBM boost. The vocals, mixing male- and female parts totally fit to the overwhelming sound production.

+ + + : I’m convinced that the main secret to get a great album is putting a lot of efforts in sound creation and –treatment with a great mix in the end. That’s precisely what this album is all about. It’s an overpowering production revealing a perfect balance between electronics and guitar. The songs are accomplished with bombast and knowledge, revealing the great production skills of Controlled Collapse.

This is without a shadow of a doubt the most accomplished and successful work of the band. They’ve grown towards a heavier ‘crossover’ sound featuring multiple noticeable songs with a true apotheosis at the end.

– – – : Speaking for myself I prefer the electronic side of the album instead of the metal one. But in the end it’s a perfect match between different influences so you don’t hear me to complain.

Conclusion: Controlled Collapse’s “Post-Traumatic Stress Disorder” is one made of rage and sonic violence! This is a great and accomplished production I can only recommend!