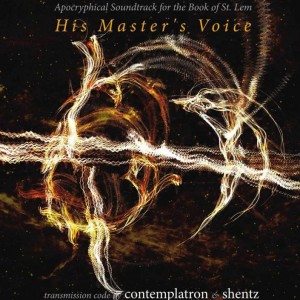 Background/Info: “Transmission Code” is the meeting between 2 Polish bands. Contemplatron is a rather familiar name from the Wrotycz roster while Shentz is active in noise fields. This album is a sonic interpretation of the sci-fi novel “His Master’s Voice” written by Stanislaw Lem. The soundtrack by both artists has been introduced as an ‘apocryphical soundtrack’.

Notice by the way that Peter Andersson (Raison d’Être) did the mastering of this album.

Content: “Transmisson Code” consists of one single piece that will get you in its grip for 51 minutes. It’s a kind of sonic collage revealing dark-ambient atmospheres and an impressive arsenal of manipulated sounds and noises. It’s rather experimental and abstract.

The work features different pieces of a sonic puzzle and every single piece clearly reveals a different input and source of inspiration. We can speak about osmosis between the rather dark-ambient universe of Contemplatron at one side and the noise-approach of Shentz at the other. There’s an impressive manipulation of sounds, which progressively moves into a kind of noise wall to get back next into dark-ambient passages.

+ + + : No doubt about it, there’s an accomplished and complementary feeling between artists, their work resulting in a total mix between dark-ambient and noise. This is the kind of production that will mainly appeal to lovers of decomposed music and manipulated sounds. The music totally fits with an imaginary sci-fi world, which reveals a kind of horror aspect as well.

– – – : “Transmission Code” is a complex and experimental production, which I can imagine will only appeal for a limited number of music lovers. The single track sounds like a totally decomposed piece of music revealing a rather versatile creation.

Conclusion: “Transmission Code” makes me think of modern art; it’s not always that easy to grasp the deeper meaning behind. At the other side it has to be said that a soundtrack is just the sonic part of a higher creation.