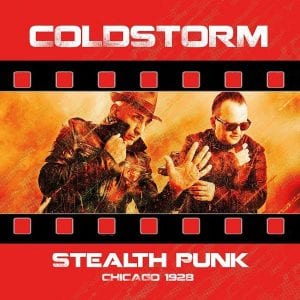 Content: This work covers different electronic influences. Taking off a rather future-pop inspired way they’re next exploring hard-danceable body-pop music and are getting pretty close to pure EBM at the final part of their work. “Stealth Punk / Chicago 1928” is an album to make you dance.

+ + + : This debut work clearly sounds as a mature and accomplished production. There are great sound treatments running through this album. I personally liked the crystalline tones and refined, icy bleeping sequences. I also have to say a word about the vocals’ production, revealing a somewhat monotonous, but charismatic singer. Cold Storm perfectly knows how to get people dancing and there is several attention grabbers featured at their album.

– – – : I’m less convinced by a few softer tracks while the EBM-driven ones are cool, but I think they here can do better.

Conclusion: Cold Storm is a real discovery and I fully enjoyed listening to this eclectic electronic album, which I think might catch the attention of a diversified audience.