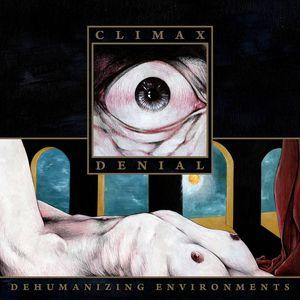 Content: Climax Denial has already been active in the wider fields of industrial music for years now and can look back on a serious discography. Most of their releases were on the good-old cassette format, which is a real intriguing element. It not only evokes good souvenirs, but today it appears to be total underground music.

Joining an established and praised label like Malignant Records, the project set up by Alex Kmet will for sure get a wider exposure. All I can say is that this 2nd CD album really deserves your attention if you’re in search of great and chilling sound atmospheres.

The work features 4 poignant and disturbing cuts, which takes off with the master track “The Womb As Vestibule”. The track reveals a phenomenal, vibrating production made by furious sound manipulations. A dark and resonating sound wave will progressively invade all the space to get you in its evil web of buzzing noises. This track reveals to be a dangerous sonic weapon, which has the power to terrorize innocent mortals. But that’s precisely an important item to speak about a successful darker release dealing with industrial and ambient.

The album moves on a similar, tormenting way. Climax Denial is not exactly the kind of music that will make you feel good. This is a production with a visual appeal, which is progressively emerging from the torturing sound sculptures.

The final cut also reveals a fascination of this artist to experiment and manipulate sounds. It’s not just a stereo-typical composition mixing elements of industrial and ambient music, but it also stands for dark and fascinating treatments.

Conclusion: There’s no better introduction than “Dehumanizing Environments” to get an idea about the evil sound potential of Climax Denial. This is a great opus maleficum, which sounds like touched by the hand of the devil!

Since you’re here … … we have a small favour to ask. More people are reading Side-Line Magazine than ever but advertising revenues across the media are falling fast. And unlike many news organisations, we haven’t put up a paywall – we want to keep our journalism as open as we can. So you can see why we need to ask for your help. Side-Line’s independent journalism takes a lot of time, money and hard work to produce. But we do it because we want to push the artists we like and who are equally fighting to survive. If everyone who reads our reporting, who likes it, helps fund it, our future would be much more secure. For as little as 5 US$, you can support Side-Line Magazine – and it only takes a minute. Thank you. The donations are safely powered by Paypal.
Tags: Climax Denial