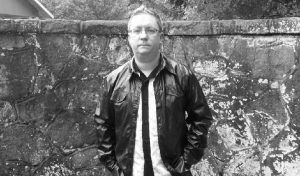 Tragic Impulse is a rather new EBM-minded solo-project set up and driven by Paul M. Graham. The second album “Devil On Your Shoulder” released on Distortion Productions will be for sure an opportunity to discover this American artist dealing with a dark EBM format.

Q: Tell us a bit more about your artistic background and activities, which finally brought you to set up Tragic Impulse?

Paul: I started experimenting with electronic music in the early-mid 2000’s and to be honest, I was pretty bad at. I remember getting a remix kit for one of Informatik’s songs and I gave up on it pretty quickly because I just didn’t have the skills to pull it off. I kept working at it though and in 2012 I submitted the song “Apocalyptic Visions” to the “Electronic Saviors 2”-compilation under the project name Eisengeist. The song had no lyrics/vocals and it was pretty raw from a production standpoint, but it got accepted and appeared on the bonus track section of the compilation.

Gaining confidence from the Eisengeist track, I decided to put more time and energy into making electronic music. However, I wanted to go in a different direction musically so Tragic Impulse was born.

Q: I guess you must notice a serious move in sound, writing and global production from “Machine Parts” (debut album released in 2014) towards the new work “Devil On Your Shoulder”?

Paul: I do feel that “Devil On Your Shoulder” represents a degree of maturation in my overall sound, writing and production. When I was working on “Devil On Your Shoulder”, I remember being very critical of the production value on “Machine Parts” because it felt so inferior to me at the time (still does). I think the biggest reason for this is that between albums I continue to get better at translating my ideas into finished and more refined products. New synthesizers, studio gear, and equipment upgrades always has some impact on this as well. I’ve already started working on the next album and feel that the sound, writing, and production is superior to “Devil On Your Shoulder” as well. I’m excited about it! I see all this as growth so it’s a good thing.

As far as sound goes, I dabbled with things like pitch-shifted vocals on “Machine Parts” (cf. “I’ll Be Your God” & “I Hear Footsteps”) but none of that appears on “Devil On Your Shoulder”. That’s something I probably won’t go back to but you never know. “Devil On Your Shoulder” is more representative of the vocal style/feel I’ll be using going forward. I do love a good vocoder though so that’s not going anywhere LOL.

Q: Tell us a bit more about the new work and especially the kind of album you’d in mind?

Paul: I originally considered making “Devil On Your Shoulder” a concept-album but it never really materialized. Although not electronic, I always loved Queensryche’s concept-album “Operation Mindcrime” and wanted to do something in that vein lyrically (I still might).

Beyond that, I really just wanted to make an album that had good dancefloor appeal. I love knocking back a pint or two at the local goth club to loud stompy music and Tragic Impulse I think reflects that. Otherwise, I tend to mix things up from song to song thematically.

Q: What’s the deeper meaning of the title “Devil On Your Shoulder” and what’s the importance of the lyrical content of your songs?

The rest of the album covers a lot of ground lyrically and thematically. “Flesh And Blood” is about how being different is OK. “Evolution Revolution” is about reinventing yourself  and “Lightstpeed” is about the vastness and wonderment of our universe. Ultimately though, the songs are about whatever the listener wants them to be and I have to say nothing feels better than when a fan tells you a song resonated with them on a personal level. That’s happened more than I expected on this album and it’s always a delight to hear.

Q: Do you have some referential musicians, bands, producers… and what make them ‘special’ to you?

Paul: There’s so many artists and people who have influenced me that it’s a hard question to answer in this limited space. To pick a few though, I would say that Project Pitchfork – particularly their early works – has had a big influence on me. From the music to the lyrics to their live shows, everything that band does just resonates with me. I also love the way Daniel Graves (Aesthetic Perfection) works a stage. I’ve seen him play to both small and large crowds and he brings the same amazing energy and intensity each time. Claus Larsen is also a big influence. One of the highlights of my burgeoning musical career has been sharing a stage with him. He’s an incredible artist and an even better person.

I’d be remiss if I didn’t mention Jim Semonik (Distortion Productions/Red Lokust) as a big influence as well. I don’t think I’ve met a person with as much perseverance, passion, and dedication to the EBM/Industrial scene as him. I feel pretty lucky to have him as a friend as well.

Q: Referring to live performances, Tragic Impulse doesn’t have a real live experience so far. How comes and what kind of show might the audience expect during the next months? How do you transpose the studio work on stage and will you get some help from extra members?

Paul: Although it’s taken a while to get going, the live show is actually up and running. Over the last year I’ve shared the stage with Leaether Strip, Ludovico Technique, and Kite to name a few. The response so far has been overwhelmingly positive and future live performances, such as a “Distortion Prod”-tour in Summer and “Danse Macabre 2” in Pittsburgh around Halloween, are being planned.

I’m definitely looking to add more people for live performances. At a minimum, I’d like to have someone on keys and maybe add a drummer for bigger gigs. I’ve talked to a few people about that so we’ll see how it goes. Other than that, I’d love to catch on with a festival or two as well. I went to WGT in Germany for the first time last year and all I could think about – other than Schwarzbier and bratwurst (yum!) – was how awesome it would be to perform there.

Since you’re here … … we have a small favour to ask. More people are reading Side-Line Magazine than ever but advertising revenues across the media are falling fast. And unlike many news organisations, we haven’t put up a paywall – we want to keep our journalism as open as we can. So you can see why we need to ask for your help. Side-Line’s independent journalism takes a lot of time, money and hard work to produce. But we do it because we want to push the artists we like and who are equally fighting to survive. If everyone who reads our reporting, who likes it, helps fund it, our future would be much more secure. For as little as 5 US$, you can support Side-Line Magazine – and it only takes a minute. Thank you. The donations are safely powered by Paypal.
Tags: EBM, Kite, Tragic Impulse, wgt