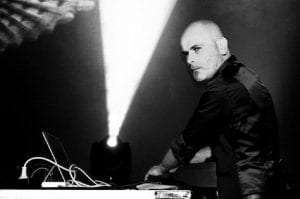 French solo-project Sylvgheist Maëlström this year released its fourth full length album in history. Driven by Julien Sylvgheist the sound can be the best defined as a sonic osmosis between different genres such as industrial-, experimental-, rave- and intelligent dance music. The new work entitled “Norillag” and released on Hands again reveals a fascinating, visionary approach of industrial music.

Q: There’s a hiatus of 4 years between your previous album “Pripyat” and “Norillag”. The least I can say is that you weren’t in a rush to achieve this new work. So when did you start the writing of “Norillag” and what kind of album did you want to accomplish?

Julien: The process of composition has started slowly in 2015 with the first sounds. I played a new track at each live performance. There was not conceptual idea. Music is a feeling and the right emanation from experienced feelings. It is a direct and raw reaction, out of control, without premeditation. A new part of life started with the work around mental confrontation, mental alienation by work oppression and so you can find a new context in life getting you to compose music.

Q: Most titles of your albums refer to very explicit places on earth so what inspired you for “Norillag” and the titles of the tracks?

Julien: “Norillag” stands for alienation by labor, dehumanization by accepting the inacceptable, a bleak subject matter, an inspiring moment of music. For the fourth time, I take on a tour of the world, way off the beaten tourist track, but to a location that bears witness to man’s propensity for self-destruction like no other: Norillag, which is a former Soviet gulag and nowadays the (arguably) most polluted city in the world, where people work in conditions that are inhumane beyond comprehension. Acid rain and smog -by some estimations, one per cent of global sulphur dioxide emission comes from Norilsk’s nickel mines. And yet, local authorities and the Norilsk Nickel complex directions attract people with large sums of money -to suffer the most horrendous work conditions. The workers accept the pollution and the severe health hazards as a condition for profit, effectively turning todays Norilsk into a revenant of the Soviet gulag and its dark history of forced labor –and death.

Q: Sound-wise ‘industrial’ music remains the guideline of your music, but it has been mixed with diversified influences such as techno-, experimental- and trance music. Where does this eclectic approach comes from and what’s your personal vision about ‘music’ and ‘sound’?

Julien: Industrial, techno, experimental, trance music, ambient, drum&bass, dubstep, jazz, new wave, metal… they represent all my music influences and background. I’m listening to these different kinds of music for 30 years now and with a real appetite to discover new universes and new ways of expressions.

I (Sylvgheist Maelstrom) began to play electronic music between 1995 and 1999. In addition to the universe of scholarly music (contemporary, in particular) in which I bathe since childhood, the musical influences are clearly identified: Einstürzende Neubauten, first, Orphx then. From this noise influence is born Sylvgheist Maëlström. In 1999, I went to Sweden for my architectural studies. It is there, in a country where the natural immensity is everywhere – colossal, dominant -that the concept Sylvgheist Maëlström really took shape. Sylvgheist Maëlström -literally ‘ghostly spirit of nature’ -is indeed the sonic translation of the uncontrollable movement of the environment taking back its rights over civilization. Nature regulating itself, without regard to the human traveling through its lands. Thus, at the heart of the Sylvgheist Maëlström project, a question emerges as to the cyclical nature of catastrophic phenomena but also, more fundamentally, to the inevitability of destruction, the inexorable nature of deaths and disintegrations.

Q: Do you’ve personal criteria and/or references when you’re composing music and do you’ve a kind of procedure when writing your songs?

Julien: If I’m a musician, I’m also architect and painter: so three media and three ways of exploring the same themes -nature, death, destiny -which allow me to express and transcend my feelings and obsessions. I’m collecting images (films and photos) of various destructive climatic phenomena for years now. This approach, started following the loss of loved ones, comes first from an ‘unidentified’ need; which becomes conscious around 2008, date on which it becomes systematically. These annihilations at the scale of the climate and the world (floods, storms, cyclones, lahars …) -founders of the artistic process of Sylvgheist Maëlström -are the thousand times magnified image, planetary, destructions of the intimate. This reflection reflects the insurmountable shock faced with the disappearance, the absolute idleness experienced in the face of what can not to be mastered. My musical work is therefore the result of an extremely intellectual and artistic constructed process (begun almost twenty years ago) as the fruit of a sensitive personal journey. It is also an affirmation and the possibility of fighting through creation the inevitability of annihilation. Creation as an antidote to loss, as ‘anti-fate’. An anti-destiny all the more powerful as creation is collective.

The composition process takes place at the very first beginning and takes shape as a sound collage, with a ‘color palette’ created for each track. The track construction starts with sound confrontation.

Q: I think you’re one of those ‘visionary’ artists composing the ‘industrial music from the future’. What means industrial music to you and especially when you’re looking back to the real pioneers in the genre such as Test Department, Throbbing gristle, Einstürzende Neubauten ?

Julien: If I look back to the pioneers, ‘Industrial’ means to me performing art with our video musical media, but especially noise experimental, based on recorded sounds (percussion and urban sounds) or sampled sounds (synthesizers, sequencers); originally my project was aimed to become the fusion of electronic music and death metal.

Q: How do you see yourself as live performer and what’s the importance of playing live for Sylvgheist Maëlström?

Julien: Since 2011, as part of the festival “FDLMEI” in Paris, the concept of Sylvgheist Maëlström is based upon video art. Indeed, thanks to my brother lighting creator Sebastien Michaud, the project takes on an unexpected scale. The music and the themes literally take shape with the images manipulated live. The work of my brother, totally connected to the rhythmic (via MIDI), marries the sounds, the nuances as well as the movements of the pieces. The result is breathtaking: the listener is then plunged, as penetrated by this universe; the scenic device leaving room for images (“Maschinenfest Festival” in 2014, “Transient Festival” in 2016, “WGT” in 2017, “Forms Of Hands 2018”.

Sébastien Michaud brings the themes of Sylvgheist Maëlström, he makes my reflections live, but also deploys a clear visual universe, to really enter in his deep music production, to feel my chaotic mental seasons, as a life variation.

For live performances, Sylvgheist Maëlström focuses on video to hypnotize the audience. Raw nature expressive images have been transposed into sounds revealing an hypnotic and mesmerizing power. As an actual mental control by images, the process of this combination loses the audience in a duality of sensations and meditations. My current set is also turned to narcosis, the dream, the memory and the reminiscence.

Since you’re here … … we have a small favour to ask. More people are reading Side-Line Magazine than ever but advertising revenues across the media are falling fast. And unlike many news organisations, we haven’t put up a paywall – we want to keep our journalism as open as we can. So you can see why we need to ask for your help. Side-Line’s independent journalism takes a lot of time, money and hard work to produce. But we do it because we want to push the artists we like and who are equally fighting to survive. If everyone who reads our reporting, who likes it, helps fund it, our future would be much more secure. For as little as 5 US$, you can support Side-Line Magazine – and it only takes a minute. Thank you. The donations are safely powered by Paypal.
Tags: Orphx, Sylvgheist Maëlström