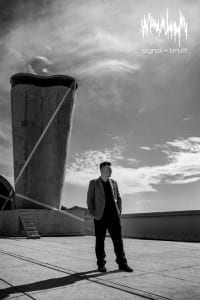 “Planisphère(s)“ is the debut album from the brand-new French project Signal~Bruit. The full length has been released on the brand-new label Meshwork Music, which is driven by X Marks The Pedwalk member Sevren Ni-Arb. Behind Signal~Bruit is hiding ‘Member U-0176’ who’s running the label BOREDOMproduct. He’s also involved into Celluloide and once started under the Thee Hyphen moniker. Signal~Bruit is something totally different revealing a retro-electro style that might remember to electro pioneers like Jean-Michel Jarre, Clock DVA, Jacno ao.

Q: What inspired and motivated you to set up Signal~Bruit?

S~B: I don’t know exactly… it just happened. Sometimes when I’m in the studio, I don’t feel like writing a song or recording something with a structure… I’m just in the mood of hearing the sequences running and so I let the sound grow… So that’s what I did, and I don’t know why, this time I started recording, with no specific idea in mind.

Q: This new project is quite different in sound compared with other bands you’ve been involved with like Thee Hyphen and Celluloide. Can you tell us a bit more about the sound properly speaking?

S~B: It all started from the need of turning knobs and nothing more… just to feel the music with the hands like when you play guitar. it immediately affects the sound depending on your fingers position. I started this way: turning the knobs and pushing the faders until it has an hypnotic feel on me. I actually didn’t think of releasing anything at first, I was just trying to please myself.

Q: “Planisphère(s)“ makes me think of a ‘sonic bridge’ between early electro pioneers like Jean-Michel Jarre, Kraftwerk ao… and a more personal and contemporary electronic approach. How would you analyze this album and its influences?

S~B: I guess all my influences, are present at different levels. As I didn’t intend to make it public when I started, I guessed I didn’t try to show anything. I just let the music flow, and my mind float. So of course, electronic pioneers of the Berliner school like Tangerine Dream come into mind, but also the minimal electronics and melodies of Jacno, repetitive sequences of Clock DVA and sound textures of Duet Emmo. But I’m also listening to Atom TM or Autechre so it probably has an influence too.

Q: I noticed you’ve been inspired by the book “Flatland“, which you tried transpose into music. Tell us a bit more about this concept and the way you worked on it?

S~B: The word “Planisphere(s)” is an attempt of translating and explaining at the same time the title and a key part of the book. While recording my electronic experimentations, I was reading this fabulous book of the XIX century by E.A. Abbot and I suddenly asked myself if I was unconsciously recording the feelings I had when reading the book… or the book gave me ideas on how structuring my electronic ‘divagations’ into something more constructed with a progression and an atmosphere. So I re-organized the recorded tracks into something more ‘logical’ with the story of the book in mind and make them take shape this way.

Q: You also produced videos of all songs on the album that can be watched by using 3D-glasses and, which totally fits to the concept of the “Flatland”-book. How did you get this idea and how did it happened?

S~B: “Planisphère(s)” is a very visual project. Images come to mind when I listen to the sounds, so I wanted to transpose these images all along the album. I finally produced automatically triggered geometric animations for all the tracks, which somehow illustrate the ‘story’ of the album, or at least the moving atmospheres. And it goes to 3D stereoscopic vision on the 4th track “Revelation”, because that’s what happens in the story. I don’t think I could explain it more clearly. It think this has to be seen not explained. I hope it will be released soon, but it has a different planning than the CD release so keep watching the Signal~Bruit youtube channel.

Q: I personally experienced your album as an antidote to the current electro-underground productions, which all sound similar and without a real creative spirit. What’s your perception as an artist and label-owner about the current scene?

S~B: I have no real statement about that. I think we all try to do the best music we can. Some people can make brilliant things at the first try,  some don’t and never will and in the middle some have good ideas or miss the point. It happens to all of us when we try to create. That’s why for BOREDOMproduct we release a very few albums. We always try to work and rework the tracks with the bands. We’re not just releasing the demos as they are when they go out of the bands studio.

I think it’s important that a label plays a role of advising the bands, adding production when it’s necessary, re-organize tracks if needed. It’s an important help for the band, which I’m afraid most of labels don’t do anymore today because artists don’t accept critics and labels don’t have time and budget for this long work.

Q: An interesting aspect about this album is that it will be the first release ever on Meshwork Music while you’re still running your own label (BOREDOMproduct)! How did it happen and what do you expect from a new label like Meshwork Music?

S~B: When I was about to complete the album I realized that BOREDOMproduct was not the label for this type of music. So I searched for a label that could understand what I was trying to do, and that could market it properly (I had no idea how). Then I read on Side-Line the announcement of a brand new label who ‘wants to push the boundaries of electronic music to a new level’. Not that I am pretentious enough to think I will push any boundaries at all, but at least the label was open minded enough to give a listen to the whole thing!

And indeed… I sent a rough version, with no proper mix and unfinished versions to André who was really enthusiast about it. Some critics replied a positive way as well and especially about the second track (“Chromatistès”) that had to be re-organized. The final album has been reworked and mixed the way I wanted.