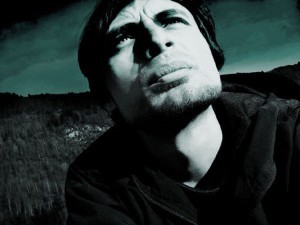 Hristo Gospodinov is a Bulgarian artist who set up Shrine in 2003. The early productions were released on Corvus Records. Later on Shrine joined arms with Cyclic Law releasing new full length albums “Somnia” (2012) and “Nihil” (2014). All productions deal with a dark and tormented ambient music genre, which is also confirmed on the newest opus “Ordeal 26.04.86”. The new work is a conceptual one dealing about the Chernobyl nuclear disaster than now happened 30 years ago. I got in touch with Hristo to get more info about his music and his new work.

Q: When and how did you get interested in music and especially the dark-ambient genre?

Hristo: I’m fascinated with non-popular music since I was a kid. I have a background of other musicians  in my family so my affinity towards music is natural, but the popular music never interested me. I was into really extreme music when I was younger but went deeper and deeper into the underground over the years. I turned to ambient back in 2001 after I listened to Raison d’Etre’s album “Enthraled By The Wind Of Lonelienes” which had a profound impact on my mind.

Q: I read that Shrine has been set up from your interest for esoteric music so how did you transpose it into sound and do you have sources of inspiration and references in the dark-ambient genre?

Hristo: I don’t have any other sources of inspiration than sound synthesis & processing tools. I like a lot some other artists’ music but this is not influencing my process of composing in any way. I just need the proper sound tools and some free time to start creating. It’s all about experimenting with sound. Of course the genre influenced me as a whole, that’s for sure. It gave me a musical direction, so to speak.

Q: I’m fascinated by your idea ‘to express obscure understandings of life and everything else in a non-verbal way’, but how does it really work when you’re in your studio?

Hristo: Yes, my vision of things in general is quite obscure, but what you quoted is rather a metaphor. Technically there is no expression of anything else than my brain’s satisfaction with sounds. As I said, it’s all about experimenting with sound. When I start creating, there is nothing else than sound and the imagery and the concept of the music are totally absent. Then, at some point, the music starts to ‘speak’ for itself and some ‘images’ start to appear in my mind. All my works are created like this except for the last one.

“Ordeal 26.04.86” is the first SHRINE record where the idea of the album actually preceded the music. In this case the concept is affecting the sound a bit, but it’s not fundamental.

Q: How did you get the idea to treat about the Chernobyl disaster and tell us a bit more about the composition?

Hristo: It’s just an idea that came to me some 10 years ago in the early period of my project. I’m quite interested in science in general and respectively in man-made technological disasters, so it’s a subject that fascinates me. I started to work on it in 2015 when I was convalescing from surgery and had a lot of free time.

Q: You’re using field recordings and clearly have a preference/fascination for sounds and noises of nature. What kind of noises are you searching for and how do you proceed to finally obtain the sounds we can hear on the record?

Hristo: I used to search for all kind of sounds in the past, but eventually got tired to chase them. I mean it’s not very interesting to just hang around with a portable recorder and a mic, doing nothing but waiting. I don’t even have a recorder at the moment, I sold it a time ago and never got a new one. But I already collected a big sound library with all kind of sounds.

You can hear most of non-synthetic sounds on “Ordeal 26.04.86”, which are sampled by myself, but not all. The ‘spoken’ sounds for example are not mine. The “St.Michael” prayer I found somewhere on the internet  and  “The Opening Of The Sixth Seal” I took from the movie “Stalker” by Andrei Tarkovsky.

Q: Your new album definitely is my favorite one, but how would you analyze your evolution from the early work till “Ordeal 26.04.86”?

Hristo: My project has evolved a lot since its early days, it’s been 13 years already. Of course the source of it all – my brain – is still the same so I can easily connect the music I currently make to the music I made back then. But my music production skills have evolved and the contemporary music production field has evolved a lot too. Ten years ago it wouldn’t have been possible to create a piece of music like “Ordeal” simply because the tools used in its making have not been invented yet. There is a tremendous shift in this field over the last few years. Software is getting closer and closer to the big modular synth stations and in some aspects is even surpassing them. It’s amazing. I hope the future will bring us even more exciting things.