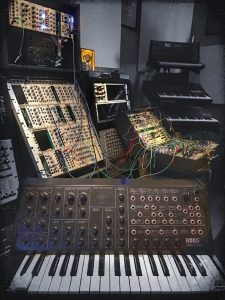 Rhys Fulber is a musician/producer who will be forever linked to the EBM giant Frontline Assembly and the ambient-ethereal-dance project Delerium. I also can mention other music projects like Conjure One, Will, Noise Unit, Intermix, Synaesthesia ao. The Canadian musician has now started a new solo-project under his own name. A first 12” “Realism” got released on Sonic Groove revealing a surprising, but great dark electro-techno sound. This is what Rhys says about it.

Q: After Frontline Assembly, Delerium, Conjure One, Synaesthesia, Will, Intermix etc… you’ve just released a first 12” under your own name! What does “Realism” stands for and what inspired you to compose this work?

Rhys: The title “Realism” was inspired by the Socialst Realism art style that also inspired the sleeve of the record. I have always been fascinated by the imagery and mystery of the former socialist states and again took my cue from this. The music itself started out as just some improvisations on the modular synthesizer. I had accumulated several sessions of this material, then went back and chose which ones to develop further. Eventually it evolved into this EP.

Q: It seems you had no specific idea of sound in mind when starting the composition, right? What do you think about “Realism” right now?

Rhys: I had no initial concept at all other than wanting to make some harder edged music again. Like I said, I just started recording some modular synth jams and that grew its own momentum.

Q: This is a totally new project so did you try to experience with new ideas/sounds/instruments/production skills ao?

Rhys: It was some of the most freeform music I have made in a while, so in that way it was very different to the labor intensive productions I have been making for some years now. I just started and went where it took me, with no real rules other than what sounded good rhythmically. Once I got told this would work in a techno format, I developed some of the sounds in that direction as well as a more club style arrangement. But overall it has been very liberating to make music this way.

Q: What has been the main focus in the global production process and do you have some references?

Rhys: The main focus is just following instinct. Recalling some old techniques I haven’t used in a while, then present them in a current way. I only reference other records for the kick drum sound, as that is the foundation of music in this style usually.

Q: How did you get in touch with Sonic Groove and what does it mean to release a vinyl ano 2017?

Rhys: Adam X (Sonic Groove) had heard some of the modular jam demos I had shared with my friend Joey Blush (Response) and then expressed interest in making a record with me. I had heard good things about the label and that they are selective with their releases so it sounded like a good opportunity.

I love the resurgence of vinyl. We have had some older releases being re-issued recently and coming from a vinyl collecting background, I am all for a resurgence in music being something more tangible than digital files, with vinyl being the premier format of the recorded music experience.

Q: Sonic Groove is labeled as techno-industrial! Are you a bit familiar with this ‘scene’ and what’s your perception about techno music generally speaking?

Rhys: I have followed techno on and off since its inception, especially in the early 90s and the last four years or so, so I have kept fairly up to date. I have always felt like industrial music’s torch was passed through different club genres over the years and now the underground techno scene is representing its spirit far more accurately than the current genre holding that title.

Q: Is “Realism” just a ‘one-shot’ experience or do you’ve further plans considering aspects such as live performances, new releases, eventually an album?

Rhys: All of these are currently in the works – a full length album as well as live performances. There was already a surplus of material as “Realism” was finished, so that will be coming on the full length. I also did a recent live set in Los Angeles in preparation for a gig at “Tresor” Berlin coming this August 10th, so expect to see more of everything.