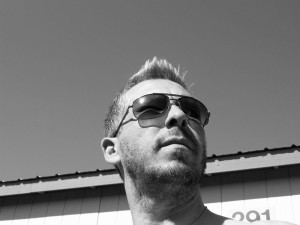 Set up in 2007 by Paul Nielsen, the Chicago-based label Tympanik Audio rapidly became one of the most visionary underground labels dealing with electronic- and industrial music. I felt deeply sad when Paul Nielsen earlier this year announced to close the doors of the label. He has no further plans to continue in the music business. Paul has been involved in this field for over 20 years, from Dj-ing, to music journalism, hosting radio programs, organizing events, to eventually running Tympanik. I can only speak for myself but Tympanik Audio is a label I’ll seriously miss for its innovation and creative spirit. This interview is meant as a homage to this great label and his instigator. Respect Mr. Nielsen!

Q: A few months ago now you made this terrible announcement about the end of Tympanik Audio. I guess it must have been one of the hardest decisions in life so how did you come to close the doors of the label?

Paul: Indeed it was a very difficult decision to close Tympanik – it affected me quite deeply on a personal level – like the end of a long relationship. I had been struggling to keep the label going for the last few years, but the financial burden finally took its toll on me and it reach a point where I really had no other choice but to shut down the label. I’m just glad I was able to get Tympanik this far.

Q: During the last year I noticed you started to release digital productions. Was it an option to keep the label running by releasing only digital work?

Paul: Yes, I began focusing on digital releases the last year in an effort to not only keep our costs down, but to cater to digital-only listeners. The interest in physical media such as CDs and vinyl have dropped significantly over the past few years so releases that I would have normally produced on CD had to be released digitally.

The important thing was to still have an outlet for the artist’s music under our banner. My main goal has always been to get the music out to our audience, so even thought the release format changed, I still felt the quality was there and the music was still accessible to our listeners, even more so since some of the digital releases were offered as ‘pay-what-you-want’ via Bandcamp.

Q: All labels are complaining about streaming and digital downloads getting CD sales downwards. What’s your point of view about it and is it indeed the main point that hurts?

Paul: I certainly understand the frustration of digital pushing CD releases into the background. This use to bother me quite a bit, as I had always intended Tympanik to be a CD-based label only. Eventually I realized that I couldn’t fight the digital music aspect of the business any longer and in order to perpetuate the label’s existence as well as meet the needs of our audience, I needed to adapt to the changes. Bandcamp was a great way for Tympanik to offer both CD and digital options to our listeners.

I’m still disappointed that CDs do not play such a significant role in music these days. I’ve always enjoyed holding music in my hands and exploring the visual aspect of it (artwork, booklets, tracklistings, credits, etc.). To me, digital music is a much colder medium; it’s a file on your device – very impersonal and in my opinion doesn’t allow that personal connection to the listener that physical formats do. Digital music is here to stay and label owners just need to accept that and meet the demand. There will always be collectors out there like myself who want to own CDs, tapes, vinyl of the music they love – I have no doubt that the demand for physical media will never go away, I just don’t think it will ever be as prevalent as it once was.

Q: What has been the feedback from ‘your’ bands so far and do you see new opportunities for some of them?

Paul: Honestly I think a lot of our artists saw this coming – I don’t imagine it was a big surprise for many of them when I made the announcement, but most have expressed gratitude for being a part of the Tympanik family. I think this closure has offered a lot of our artists new opportunities to project their music to even larger audiences by moving on to other labels and getting more involved in the promotion of their works. It’s good to see some of our artists like ESA, Autoclav1.1, Tangent, Subheim, Totakeke, Displacer, and others find new homes for their music, and I’m confident that many others will move on successfully as well.

Q: Tympanik Audio will be reminded as a label with a visionary taste so what was the original concept all about and did you notice an evolution throughout the years?

Paul: The original concept was to promote music that I felt deserved more attention – unknown and up-and-coming artists who were self-promoting and had no label to help them reach a wider audience. I was hosting a radio program in Chicago for many years in an effort to achieve this, but eventually I felt that starting a label and releasing music on CD would significantly expand the audience for these artists’ work. In the early days of the label, my music tastes were quite eclectic, ranging from industrial, ambient, IDM, rhythmic-noise, etc., so I was initially attracted to artists that not only fell into these broad genres, but were able to combine these styles successfully. I think in the first few years there was a larger focus on industrial-style music, but eventually I began choosing albums to release that weren’t so easily labeled; a hybrid of music styles set on a foundation of originality and accessibility. Artists like Zinovia, Tangent, Idlefon, Tineidae, and MultiColor, are a few that come to mind. Prior to my decision to close the label, I felt like I had found our niche style-wise and I was looking forward to progressing that in the future.

Q: What did you keep in mind from your activities as label owner and I’m especially thinking about some positive experiences?

Paul: I thoroughly enjoyed running Tympanik Audio. There was a lot of stress, financial investment, time, and hard-work involved, but it was a dream for me to work with so many talented and wonderful people over the years. It’s an experience that I feel very fortunate to have had. Everyone involved were so supportive and generous – Tympanik Audio would not have been what it was if it were not for the dedication of everyone involved. I will cherish it always, that’s for sure.