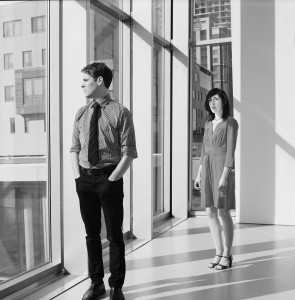 It took five years to Richard Oddie and Christina Sealey to unleash a new full length album of their ORPHX sound project. They however remained pretty active and moved on elaborating a solid sound hybrid between industrial- and techno music. Their new opus ”Pitch Black Mirror” has been released on Hands (CD format) and Sonic Groove (vinyl format), which only confirms the small distance between both music styles.

Q: You are no longer releasing full length albums on a regular basis. How come and what have been the triggers to start composing the new opus “Pitch Black Mirror”?

Orphx: During the last few years we’ve been more active than ever, but focusing our energy on our 12” releases with Sonic Groove, live performances, remixes, and a number of side projects. We’ve been working on this new album for the last couple years, but it was only this year that we managed to find the time to bring it all together. We knew we wanted to focus on the modular synthesizer systems that have become central to our live sets and studio work, as well as making vocals more central to a number of the tracks.

Q: I noticed that ORPHX has been set up 23 years ago now! What according to you are the main evolutions and changes since the early years till your newest work?

Orphx: We began in the early 1990s with an improvisational approach that was inspired by early industrial music. At this time we were using quite primitive equipment: a couple of synths, reel to reel tape machines, a sampler, a drum machine, some pedals, and some tools and scrap metal. Rhythms quickly became more prominent in our work, and we gradually started taking a more structured approach to composition, while still retaining improvisational elements.

By the mid 90s we were combining industrial music with elements of techno, electro and dub. By the early 2000s, we began to take more influence from electro-acoustic music, using location recordings to create rhythms and textures. We also began using more computer software at this time.

From the mid 2000s forward, the techno elements in our work became a bit stronger but still with a strong emphasis on industrial themes, tools, and techniques. At this time, we began moving back toward an improvisational approach to live performance using Ableton Live software and modular synthesizers. Our new album combines all of these influences and phases from the last 23 years.

We were very happy to have our friend Aron West contributing to this record, as he was one of the original members of the project and has supported our work all of these years. Aron and Rich also collaborate under the name Oureboros and they’ve just released their second album on Ant Zen.

Q: I experienced “Pitch Black Mirror” as the ultimate sonic bridge between industrial- and techno music. How do you explain the growing fusion between both genres?

Orphx: Techno has always taken some influence from industrial music and this has become more prominent or popular during different periods in the music’s history. Conversely, some artists based in industrial music and noise have been incorporating elements of techno into their work for many years. The current trend of ’industrial-techno’ has become surprisingly popular and long-lasting, and it is interesting to see the extent to which many new artists are now drawing on a wide range of related influences.

This shift towards harder, darker, and more challenging forms of dance music is, in part, a reaction to the present state of the world and perhaps also a reaction to the more ’safe’ and polite forms of techno that reigned in the late 90s and early 2000s.

Q: I noticed that the album concept is inspired by a poem. What is it all about and how do you transpose this concept into music?

Orphx: The concept and title were inspired by a line from a poem called “Dark Pool” by a Canadian poet named P.B. Hunter. The poem expresses the idea of facing and transcending or transforming traumatic experiences, learning from them. We liked this idea and it is a theme that runs through much of our work. The poem and concept inspired some of the lyrics and titles, and we tied this into related imagery from Jean Cocteau’s film “Orpheus”, which inspired the cover photo.

We were also inspired by personal and political events over the last year, including political unrest and protest movements in Canada and the United States, and this is reflected in some of the samples and lyrics.

Q: “Pitch Black Mirror” has been released –and for the very first time, on 2 familiar ORPHX-labels, which are Sonic Groove for the vinyl edition and Hands for the CD format. How did this happened and is it meant to reach both audiences, the techno- and industrial scene?

Orphx: Yes, we wanted to reach both audiences and maintain our relationship with both labels so we were happy to make this happen.

Q: One of the main characteristics and strengths of your work for sure remain the sound treatments and impressive manipulations. Can you reveal the secret formula behind this aspect of your work and do you have some influences and standards for this topic?

Orphx: We’ve always been drawn to quite simple hypnotic patterns that overlap and interact over time. Some of the artists that have really influenced us in this respect include Vromb, Mika Vainio, and Conrad Schnitzler. We spend a lot of time creating sounds and shaping them and the tools available now are really sophisticated, both in terms of software and the modular synthesizer systems that we’ve fallen in love with.