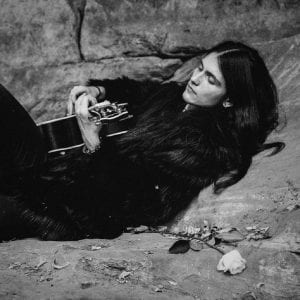 I last year discovered the German duo Wisborg releasing their debut album “The Tragedy Of Seconds Gone” on Danse Macabre. It’s a promising album mixing elements of gothic- and rock music. A few months later the singer of the band, Konstantin Michaely, released his solo-debut as Morgue Poetry. The album –also released on Danse Macabre, reveals a styled and deeply artistic creation composed by acoustic guitar and piano. This project has a real strong potential. It’s dark and delicate, authentic and melancholic! Here’s an introduction to the intimate sound universe of Morgue Poetry and the album “In The Absence Of Light”.

Q: We last year discovered you as member of Wisborg, but you also released the debut album of your solo-project Morgue Poetry. Both projects are different in their sound and influences so what does it reveal about you and the musician you are plus your influences?

Konstantin: It reveals that I’m into different types of music. I have a lot of creative energy and enjoy getting rid of it in multiple, not only musical ways. The biggest limitation to that is money, never a lack of ideas or motivation.

Q: Morgue Poetry definitely sounds as a more personal and very intimate concept; a composition and its lyrical content where you dare to reveal some sensibility and fragility. What did you try to express?

Konstantin: Lots of different things. The songs on “In The Absence Of Light” are not written from my perspective though. Usually, I have a topic that I’m moved by in some way or the other as a starting point, generalize it to a certain degree and then put it into words.

Q: Both the name of the project and the title of the album feel related with each other. What fascinates you as musician, and maybe as the person hiding behind the musician, in such dark themes?

Konstantin: I tend to write about feelings like pain and despair because it helps me to cope with them. When I’m happy, I just enjoy the moment as long as it lasts.

Q: The songs have been composed with acoustic guitar and piano arrangements. How did the composing of the songs happened and what have been the main difficulties you encountered in this process?

Konstantin: I started with writing guitar parts and vocal melodies until I had basic song structures. Afterwards, I added other instruments like piano, percussion, trumpets and strings to the arrangements, but it was very important to me that the songs work without these elements, too.

Q: I noticed you played some Morgue Poetry song(s) during live shows of Wisborg. How did that happened and do you have live plans with this new project? Can you reveal some details?

Konstantin: We were planning to perform “Killing Spree” live on the album’s release date, but it didn’t happen due to technical difficulties at the venue. The first Morgue Poetry concert is going to take place in “Schokoladen”, Berlin on April 26th. Nikolas is going to play the piano and we are sharing the stage with our friends New Days Delay, so it’s gonna be a blast!

Q: I think the limited edition of the album is already sold out while you got a very positive response from the media so what does it all mean to you and how do you see Morgue Poetry evolving in terms of new songs, collaborations with other artists, live performances ao?

Konstantin: The main focus is still on Wisborg, but I’m planning on letting Morgue Poetry evolve on the side. More shows are planned and a lot of new material is written. As I said earlier, it is mainly a question of money how long it’s gonna take me to publish new songs. If someone is willing to pay for the production, please get in touch! (laughs)