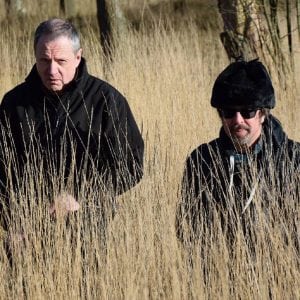 Lederman / De Meyer maybe doesn’t sound as the most ‘sexy’ band name, but when you realize this ‘new’ group features two pioneers from the EBM movement, you only, but can curious what those Belgian artists have achieved. The album “Eleven Grinding Songs” (released on Alfa Matrix) gives us the answer: a somewhat self-willed electronic sound mixing traditional EBM elements together with experimental- and more dark-pop orientated influences. It first of all is an open-minded and creative electronic work, on which both artists seem to have got a lot of fun.

Q: You guys have been involved with numerous bands/projects so how did you get the idea to join hands and what did you try to exorcize you maybe never haven’t done before?

Jean-Marc: It actually started with an English label wanting to do a Fad Gadget covers album. They contacted me and I thought I should try this. I thought about a singer and it seemed to me Jean-Luc De Meyer would be great at that. We tried, had fun, went along and did more tracks…

Q: How was it working together and did you establish some guidelines lines regarding sounds, influences etc before you started the composition?

Jean-Marc: Guidelines? None that were really conscious except having fun and keeping it an easy going thing.

Jean-Luc: But I suppose that we also kept in mind a certain sense of a global balance all in all.

Q: I got the (subjective) feeling “Eleven Grinding Songs” is an album where you try to make understand young musicians they’ve to become more creative with their gear and instruments instead of copying each other. But what is it really all about and what’s your perception about the ‘new’ generation of electro artists?

Jean-Marc: Far from us the idea to educate anyone doing anything, we’re not that vain or patronizing lol. We just wanted to make a good, creative, interesting album. I’m personally invested in making a track sound convincing while different.

Jean-Luc: Right, we have no intent to educate anyone.

Jean-Marc: Electro is now a very large area where you do find a lot of smaller niches and styles. But if you mean ‘industrial’ new artists, there are some dealing with good stuff (like Empathy Test and some others), but one sees that it’s more ‘future-pop’ than EBM, it’s more sculpted into something easy on the ears.

Jean-Luc: I don’t have an opinion about the new generation as a whole, just about a few individual artists. I also like Empathy Test, and Blac Kolor, for example.

Q: The lyrical content of this album has something fascinating, but still pretty hilarious and I’m especially referring to one of the main songs of the album “Flowers And Birds And Bees”. Tell us a bit more about the lyrics and more especially about this song? What is it all about? Something personal I presume? Maybe a little less cynical? Or maybe you were in search of inspiration or… maybe drunk?

Jean-Luc: Drunk, not at all. I made a summary of comments that I often heard among my family members and friends who sometimes listen by curiosity to what I do while they are into totally different musical styles and don’t get it at all. And also from a lot of commentators who know much better than you what your artistically directions should be…

Q: I can imagine covering Fad Gadget remains something special and even a bit a kind of challenge. What did you try to accomplish?

Jean-Marc: See above for the genesis of the idea. We tried to cover it in a way that would respect the immense original making it tense and ready-to-jump at your throat.

Q: Is this a one-shot project or do you’ve further plans to work on new songs and maybe live performances?

Jean-Marc: We have started working on new songs for a second album, but keep it as we did for the first one: keeping it a fun and easy-going process.

Jean-Luc: This album is the first ever where I recorded my vocals without having in mind the fact that we might have to perform the songs live at some point. And I feel no real need right now to play them live. They fully exist on the album and don’t need a further extension. Playing them live will require a lot of time and work that I would personally prefer to invest in recording more new songs for a new CD.

Since you’re here … … we have a small favour to ask. More people are reading Side-Line Magazine than ever but advertising revenues across the media are falling fast. And unlike many news organisations, we haven’t put up a paywall – we want to keep our journalism as open as we can. So you can see why we need to ask for your help. Side-Line’s independent journalism takes a lot of time, money and hard work to produce. But we do it because we want to push the artists we like and who are equally fighting to survive. If everyone who reads our reporting, who likes it, helps fund it, our future would be much more secure. For as little as 5 US$, you can support Side-Line Magazine – and it only takes a minute. Thank you. The donations are safely powered by Paypal.
Tags: EBM, Lederman / De Meyer