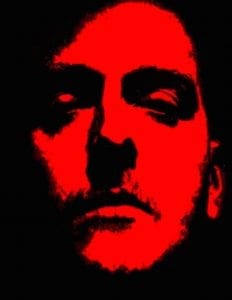 JK Flesh is the electronic- or should I say techno project of Justin Karl Broadrick. Internationally praised and renowned for his involvement with Godflesh, JK Flesh brings a totally different exposure of the artist. He recently released the third JK Flesh full length entitled “New Horizon” on Electric Deluxe. It’s not pure techno music, but an interesting and somewhat experimental approach of the genre.

Q: What kind of work did you want to accomplish with “New Horizon” and how do you perceive the evolution in sound from the debut album “Posthuman” till the new work?

Justin: The evolution has been somewhat radical; “Posthuman” still contained the residue of my more established works, guitar and vocals much like Godflesh, but fundamentally electronic music, which was the albums intention. Ironically “Posthuman” was designed as a purely electronic statement, but the then label boss of 3by3, Steve, who was also a member of the much missed Cloaks, suggested that I integrate the vibe of my other work with guitars and vocals to make something more arguably unique, at that point I felt maybe he had a good point. So, I set about adding organic instrumentation to the existing songs.

Once he folded both his label and project, I intended to lose all organic/physical instrumentation and return to my original vision for JK Flesh. Each subsequent release has become increasingly electronic based. “New horizon” is an album, so it’s conceptual and should be viewed as a whole work. In a nutshell, it’s an exploration of the darker fringes of what  is essentially ‘dub techno’, as established by such luminaries as Basic Channel, Maurizio and the Chain Reaction label.

Q: One thing is for sure I experienced “New Horizon” as your most ‘progressive’ JK Flesh work to date; it feels a bit like you’re exploring different sonic horizons while accentuating some ‘techno’ influences. What is it all about?

Justin: Yes, for me it’s still fundamentally techno, and although I generally don’t like work that is considered progressive, much like I’ve never been enamoured with guitar solos! I do agree that texturally this album is indeed progressive; I wanted the machines to breathe and appear as if they’re organisms, which I achieved via constant, but subtle manipulations of every piece of hardware used in this creation.

Q: What did you keep in mind from the entire writing- and production process of “New Horizon” and do you’ve a specific way of working?

Justin: Maybe I’ve covered this above, but I can add that this album was created via hardware only and then edited on a computer, my task was to make the machines sound alive and consistently in flux, which somewhat mirrors the subject matter of our next stages of evolution, and my emotional response to this evolution; it’s not academic, it’s a reaction.

Q: I’ve been intrigued by the track “The Next Stage”, which has something more soundtrack-like. What is it all about and are there some plans/ideas to ever compose a soundtrack?

Justin: I recently backed out of composing a soundtrack for a film! I found the process too limiting, and I think ultimately I’m useless at following someone else’s criteria.

“The Next Stage” is probably the pinnacle of the album in the context of it being an exploration of texture; this track is intentionally more concerned with texture than any actual musical content; it lives and breathes, and this was what I was attempting to achieve, but it’s still techno, but stripped of virtually everything, but conversely it’s not really truly minimal because texturally it’s maximal.

Q: Techno music becomes more and more diversified and I especially like the mix with industrial music. What’s your perception about techno music globally speaking and specific evolutions such as industrial-techno in particular?

Justin: Everything appears to be about micro genres now, and I hate to sit within any micro genre due again to the limitations imposed, but I have an obvious affinity with both industrial music and techno loosely speaking, for me my sound is old; it’s rooted in older industrial music like Throbbing Gristle and Cabaret Voltaire and older techno like Jeff Mills and Basic Channel. I see myself fitting somewhere between the two camps, the organic aspect and having some sort of swing to the music is also important to me; I’m less interested in industrial music that is what I’d call stiff and lifeless. I like this music to be on the verge of decay and sound like it’s crumbling apart.

Q: JK Flesh remains a truly sonic enigma to me; a mix of industrial-, minimal-electronics, dark-techno music ao genres. What kind of sound do you want to create and how do you see this project evolving?

Justin: This project is still in its infancy as far as I am concerned; it’s the beginning, I’m still learning to communicate this sound; it’s somewhat isolated and it’s very personal.

Since you’re here … … we have a small favour to ask. More people are reading Side-Line Magazine than ever but advertising revenues across the media are falling fast. And unlike many news organisations, we haven’t put up a paywall – we want to keep our journalism as open as we can. So you can see why we need to ask for your help. Side-Line’s independent journalism takes a lot of time, money and hard work to produce. But we do it because we want to push the artists we like and who are equally fighting to survive. If everyone who reads our reporting, who likes it, helps fund it, our future would be much more secure. For as little as 5 US$, you can support Side-Line Magazine – and it only takes a minute. Thank you. The donations are safely powered by Paypal.
Tags: Godflesh, JK Flesh, Mills