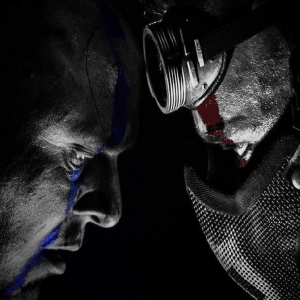 Based in Leipzig (Germany)  Andreas Engleitner (lyrics & vocals) –  Bastian Polak (composition) set up Intent:Outtake in 2014. The band name is ‘a play on words, a stark contrast in itself’, which was found ‘during a brainstorming’ with their producer and label boss Tommy Steuer. The third full length “Schmerzmaschine” released on Sonic-X is a great and well-crafted production, which will appeal for all lovers of dark-electronics. This is what Andreas Engleitner has to say about his band and the newest work.

Q: Let’s traditionally start by asking you about your personal musical background and the way you set up Intent:Outtake?

Andreas: We both have been in the dark/alternative scene for quite a long time now and have also played in other bands before. In 2014 we met and fortunately felt that this was a good match right away. Shortly after that we played our first live gig at Wave Gothik Treffen and six months later our first album was released.

Q: You define your music as ‘dark-electro’. What fascinates you in this music genre and what are your personal references when it comes to the composition?

Andreas: Our music gives us the opportunity to convey a lot of emotions; they can range from melancholic to angry – everything is possible. It gives us space to express our feelings, to deal with things that happen in the world. Unfortunately, negative events seem to have prevailed in the last few years.

Q: I experienced your new album “Schmerzmaschine” as your most accomplished work to date; it’s powerful, bombastic, melodic and sophisticated. What’s your perception about this new release and tell us a bit more about how this album came through?

Andreas: Yes, we feel exactly the same way about it. Whereas our first album “Wake Up Call” is definitely a little more edgy and rough when it comes to the compilation of songs, there is a lot more harmony in “Schmerzmaschine”. We are strongly influenced by things that happen around us and therefore our songs reflect this energy by coming across more powerful and dynamic.

Q: Can you a bit more specify the lyrical and what does the ‘dark’ content of your songs reveal about your own perception about life and human being?

Andreas: We want to appeal to the common sense of the people. We find it hard to come to terms with how superficial and shallow-brained a lot of people have become and are therefore trying to hold up a mirror to society and address obvious deficiencies in a very direct way. We are truly concerned about the future if nothing is changed and we refuse to simply ignore problems and grievances.

Q: I noticed there’s an Intent:Outtake fanclub! I guess you guys must be really proud of it, but what does it really stands for considering the number of fans, their activities and the interaction with the fans?

Andreas: We are indeed very proud of our fans’ activities, but we didn’t have anything to do with the launch of fan clubs and fan groups in social media. They were initiated by people who like our music. Of course we do use these groups to communicate with our fans, but we also enjoy getting in touch with fans personally after concerts or at events within the scene.

Q: Intent:Outtake is located in Leipzig, which immediately makes me think about the famous WGT festival. How many times have you played WGT and what does it mean to you as band and citizens from Leipzig to play there? Can you compare it with other big festivals you already played?

Andreas: WGT is always something very special. This festival takes place not only in the city, but literally all over the city and therefore the special atmosphere can be sensed everywhere. It is unique and stunning to see how a whole city is wrapped in black. This year is going to be our fourth WGT and since we live here, it feels great to have a home run and to be able to play for people from all over the world who do not have the chance to see us live a lot. We simply love it. The only negative aspect from a fan’s point of view is that it can become rather difficult to see bands playing in different venues at roughly the same time due to the long distances the venues are apart from each other. This is much easier at other festivals.