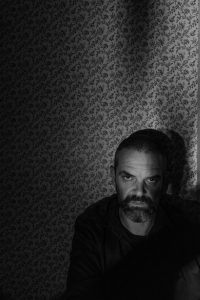 Patrick Stevens set up Hypnoskull in 1992. The Belgian producer became one of the industrial pioneers experimenting with techno influences of was he just a techno producer walking at industrial fields? Twenty five years later Hypnoskull has accomplished an endless number of productions and has achieved one more new opus entitled “Die4.Generation”. The album has been released on Ant-zen revealing a new overwhelming production.

Q: 1992 – 2017! 25 years of Hypnoskull, I think it can’t leave an artist insensitive. What comes into mind when evoking this anniversary and why did Hypnoskull became the main project you ever have been involved with?

Patrick: It came as a surprise almost. I realized it somewhere in the beginning of 2017. What can I say? Well, it is a confrontational thing to discover that your brainchild became 25 years old. It simply means I became 25 years older. The most frightening part is that it doesn’t feel like that long. I mean, in my mind it is always ‘just the start’. I always want to improve things, sounds, messages and I think the entire anniversary thing put my feet on the ground showing me that time is running fast…

Hypnoskull became the main project simply because it was my own solid solo-project. Obviously I can’t throw myself out or get thrown out, which is pretty difficult, cause I had plenty of moments when I just thought it was done and nothing should be added. But after that I felt the urge to create and improve again.

Q: Artists often release ‘best of’-albums to celebrate this kind of event, but you simply released a new album. I’ve always considered ‘best of’-albums as something for teenagers and grandparents. New work is more original don’t you think, but what can you tell us about this new opus?

Patrick: I don’t know if I can admit what I will say now, but I don’t like the idea of a ‘best of’ format because each and every time I released albums or EP’s, each and every time I kind of ‘don’t like’ the result. Like I said before, I can only think about improving it. So the day a new album hits streets I am already ahead in a kind of future and most of the time working on new material… There will be one exception now in 2018 and that is the vinyl release of a few tracks from the 1999 “ffwd>burnout!” album on the Berlin techno label Repitch Recordings. I agreed on that one because of the fact that it will also contain a great remix by a producer I respect a lot, and because the people behind the label are superb young producers who were highly influenced by what we were doing in the nineties.

But what can I say about “Die4.Generation”? Well, it’s my most worked out album ever on all levels.

Q: It also seems to be a very personal and somewhat intimate album, but at the same time still a bit political- and social like. What is it all about and where do you place this work in the wide discography of Hypnoskull?

Patrick: I’d place it in the shelves called ‘more mature works’. I mean, it is on all levels indeed very personal, and in my opinion extremely political. It is a personal kind of ‘internal’ call to not lose radicalism. In times where ‘radicalism’ is only portrayed as something negative, I dare to call it a necessity for any sane society. Radical ideas have always inspired lots of people, and being radical does not mean being violent. Radical art, literature, film, music,… noise. Everything I do myself comes from so-called ‘subversive’ art. I want to stay awake and question everything, and I hope I can influence some of my audience to do the same.

Q: I think you’re one of those artists who created a sonic bridge between industrial- and techno music. But you already did it in times when techno music was not really liked by industrial lovers. How do you explain the crossover between these music genres?

Patrick: To me there was always a logical connection. I started as a techno producer in 1994 and I have always produced the rougher kind. So, with my background in alternative music also I rapidly started to mix those two worlds into one new form. To me it is not even a crossover, rather a logical match. The cold, monotone drone of machines – mathematical, straightforward, hard. And yeah, it created a kind of ‘new’ subculture in industrial music with lots of new events back in the days like f.e. “Maschinenfest” and some others.

You can believe that nowadays I am very pleased to see and hear that a lot of huge leading technoclubs are scheduling serious industrial techno or sometimes even the ‘real’ stuff. Esplendor Geometrico in “Berghain”? Hypnoskull at “Kit Kat” or “Arena”, who would have predicted that to happen?

Q: So you’ve been in a way a ‘visionary’ artist who dared to innovate and explore new sonic paths. What’s your perception about our contemporary ‘underground’ scene and elements/movements of innovation?

Patrick: I never thought in terms of scenes. That kind of both helped and did not help me. I think a lot of innovation in music is done when you dare to suck in a lot of influences and spit them all out in some other form. So I mainly believe in that kind of open mind which is required to do so. So… I don’t think a lot of innovation will be done when you limit yourself inside a scene, with very own sets of ‘rules’ and expectations. Like I said, that attitude also worked very much against me. But it brought a lot too. Always new kinds of live situations for example, or finding yourself suddenly working with people like Dutch super-producer Kubus, a hip-hop beatmaker. I don’t regret.

Q: I would like to get your opinion about music and journalism and especially the evolution (referring to social media, streaming platforms etc) during the past few years? What can we expect from the future and what does it mean for the music industry generally speaking?

Patrick: I studied journalism myself so I like the question a lot. I think the ‘new’ media brought a lot of advantages and disadvantages in the same time. It is much easier to get music and messages ‘out there’ now, but also much more difficult to be seen amongst the millions of others. So the traditional music media don’t play that important role anymore. I don’t think that is bad, since my impression was anyway that the traditional music media and the music industry were playing dirty games anyway. Endorsed interviews and reviews as a part of the marketing plans of some managers who didn’t care if they either sold music or cars. As an underground producer I never cared about coverage anyway. It was nice to get, but also ok to not get coverage. Nowadays I see that the effect of f.e. being inside the mix or podcast of a promising new or established deejay brings a lot more fresh attention and new audience. That’s a great, and musical way of promotion. I discovered a lot of new interesting music myself by listening to these mixes.

The future… Well. Who knows… I am ready to be surprised any time. As long as I can be surprised I will believe in the future.