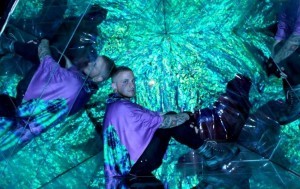 I never heard of FoxxyNewport before the recently released “Neutral”-album. Operating from San Francisco (USA) Jess James has been active as DJ and set up FoxxyNewport in 2012. After a few self-released EP’s he got signed to the upcoming British label AnalogueTrash unleashing the debut album “Neutral”. This is a well-crafted production mixing elements of electro-pop and dance music. The album has been produced by Mr.Kitty, which is a familiar name active at the electro-pop fields.

Q: FoxxyNewport is a rather strange and unusual band name. Is there any particular meaning behind this name and can you briefly tell us the way you came into music and the creation of FoxxyNewport?

Jess: Oh goodness. I would say my name is my biggest regret! It came to when I was 17, spending my summer nights chainsmoking and staying up late. It just stuck. I was inspired to pursue music by Uffie. If this brash and alluring person could make a hot track with no vocal training what was in my way?

Q: I found a rather intriguing quote about you: ‘a self-styled anti-pop star for the queer and the alternative communities’! What do you think about it and what does it say about your sound?

Jess: There’s many different ‘Models’ for music. As a DJ I’ve become more anonymous. I’m just a wall of sound. But with a synth-pop project where my contribution is vocals I am a ‘face’ for it. I didn’t wanna represent anything typical, I wanted to represent myself and the people who inspire me. Unlike a well manicured pop star I’m less filtered, a little less polished, and sometimes a lot crazier. You must represent your brand and where you come from/who inspires you. I would say my sound is a fun mix of 80’s synth staples, 90’s dance hooks, and a candid honesty.

Q: Tell us a bit more about the writing and global production of the “Neutral”-album?

Jess: “Neutral” was my guiding light during a dark time. When Mr.Kitty and I did the “BLVCKLODGE”-EP we used Laura Palmer and the world of Twin Peaks as a basis. However, listeners had almost no idea who FoxxyNewport was. We decided to change that.

There’s two things I know very well: Sex and Sadness. The sexual songs are all honest, they’re fantasies, realities, things I think most of my listeners can relate too. The sadness is personal. I wrote about my brothers suicide, or “Worry” which was meant to be a light to shine to my Father as he was about to be incarcerated and I was about to be homeless. Eventual Analogue Trash found the record and we worked out a deal I am very happy about. Europe has been more receptive to it then American audiences.

Q: Mr. Kitty has been involved as producer. What has been the impact of his sound and knowledge on your work?

Jess: I think the bond between producer and vocalist is like master-and-pupil. Mr.Kitty served as an amazing mentor to be, imparting a strong work ethic, a confidence I never knew I had, and an understanding of ‘the industry’ I never would have known otherwise. I think about him often and am beyond grateful for everything he’s done. He is a very special person. It was an honor to be molded in his image as I found my own footing.

Q: “Neutral” is available at digital platforms, but still on cassette format! What do you expect from the cassette format and is there any chance to see the album being released on other formats (vinyl, CD)?

Jess: I like cassettes because they are a novelty of sorts. There’s something very special about physical media. A VHS collection, a vinyl collection, etc. “Neutral” is hugely influenced by 1980’s synth-pop, a time where I believe a lot of people would have snagged it on cassette if present. They’re easy to ship, easy to produce, and people like them. I would consider a CD or vinyl release of “Neutral” if the demand was high enough. Give people what they want.