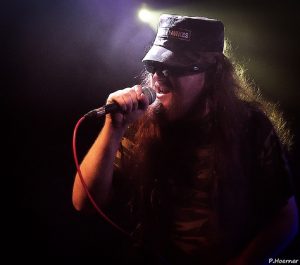 Ethan Fawkes is a Belgian DJ and producer who since 2014 started to release records like hell. His music is a fusion between different electronic genres such as minimal EBM, techno, acid and rave. After an endless number of EP’s he finally released his second full length album “I Will Dance On Your Grave” on I-Traxx Red Edition. This album was the right opportunity for an interview with the always accessible Ethan Fawkes.

Q: I think that your early music experiences and roots are into metal music, right? How did you get in touch with electronic music and do you see similarities between metal- and electronic music?

Ethan: It’s all written on my bio that I started to have interest in music with grunge and metal because it’s the style of music I was  listening to when I started to make music and played guitar, but before that I was already a big lover  of electronic music like new-beat, early 90’s rave and EBM. So when I had the age to go to clubs, and could listen to techno, acid, electro and TBM, my interest for electronic music came back fast.

There’re similarities between both styles as it’s all about underground alternative music. There’s no quest for mainstream sound, but a lot of ‘do it yourself’.

Q: You just mentioned the electronic genres you were listening to and, which we still can find back in your work. I can imagine you feel related to very different scenes? Tell us a bit more about this eclecticism?

Ethan: The techno I love is not from Detroit, it’s the techno hailing from Europe and a lot from Belgium, rave years from 90 to 93, this rave techno came from new-beat and new-beat came from EBM. Think to Jacky Meurisse who experienced with the 3 styles. So I consider that all those styles are made to be mixed together.

Q: During the past few years you’ve released an impressive number of EP’s on and endless list of labels while you worked with numerous electronic artists. How do you explain this versatility and what have been your best experiences to date?

Ethan: I started to work on my electronic tracks in 2001. It took me a while before I got satisfied with my sound. Mixing the tracks was a real pain in the a***. It’s only since +/- 4 years that I’m happy with my sound and I now can concentrate on the composition process so it’s only for 4 years that it became funny to do music. It motivates me to go on and as I had the chance to work with a lot of fantastic artists, it’s not that easy to choose the best experiences.

For my first EP “There’s A Place For You” it was great to have remixes from The Horrorist and Al Ferox who are 2 of my favorite artist. Last year for the EP “Raving Is Still Alive” Luke Riga (Luc Rigaux from Apotheosis) and Outlander who I’m fan since I was 14 years old both made great remixes too. But I stop here cause it will be really too long mentioning all great experience (laugh).

Q: You’ve just released your second full length “Dance On Your Grave”, which brings a mix of familiar songs released on I-Traxx Red Edition and new songs. What kind of album did you want to accomplish and tell us a bit more about the new songs?

Ethan: For this album I wanted something more electro-techno and less metal than “Symptom Of Apocalypse”, so no guitars here. For the vocals I just tried and experimented different ways of singing instead of screaming. Sound-wise I avoided too much ‘classical’ sampled instruments, but focalized on sound design with analog synths to get an album in between 90’s old-school techno and 80’s EBM with a little touch of ambient on top. The production of the vocals isn’t that usual for this kind of tracks.

About the tracks of the album, 8 of them have been previously released on digital EP’s with remixes and there are 7 new cuts including 3 instrumentals. There’s the very ambient-like “Epitaph” and the more into industrial-like “Riot” while the title song “I Will Dance On Your Grave” has a 3D video clip made myself, which took me the same time than the entire album.

Q: What’s the importance of the lyrical content and tell us a bit more about the title of your album, which reminds me a bit of Charles Baudelaire?

Ethan: It’s not difficult to find inspiration when you’re listening to actualities; leaders from all sides who are just interested in money and power, lies and manipulations everywhere and everything is getting worse. “I Will Dance On Your Grave” is my dream of revolution even if I think I’ll never see it…

Q: Your image has something atypical; you still look a bit like a metal-freak, but dealing with electronics. What’s the importance of image and especially when it comes to live performances?

Ethan: Well, I think I started to love this look when I was a teenager and watched Max Cavalera on TV. And when all of your clothes are military-like, you get no pain to choose what to wear each day (laugh).