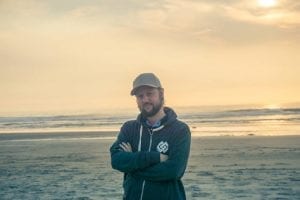 In 2003 I heard the debut album “Cellblock” from the Swedish solo-project Atrium Carceri. This dark-ambient opus was one more great production released on the legendary Cold Meat Industry. Simon Heath should rapidly became a recognized artist in his music genre. He went on unleashing noticeable albums, started with side-projects such as Sabled Sun, Krusseldorf… and set up his own label Cryo Chamber in 2012. Simon Heath is a busy and prolific artist who by the end of 2018 released the newest Atrium Carceri opus “Codex”.

Q: 2018 has been a prolific year for Atrium Carceri. How do you look back at your different releases?

Simon: It’s been a creative year. I got the opportunity to work with a lot of talented artists and finally managed to finish up “Codex”, my solo album I have been working on for quite some time. All in all I tried pushing my boundaries, but my memory is getting blurry now that the year is drawing to a close.

Q: Your newest album “Codex” took you three years to get accomplished. What have been the different stadia you had to gone through to achieve “Codex” and what have been the main challenges and difficulties you encountered?

Simon: Since I created art, text, sounds, mastering, design, I could go back and forth between it all instead of finalizing stages and moving on. Both a curse and a blessing since it is a lot more time consuming, but being able to move freely within each step creates a lot of opportunity to tweak the coherency. If I had to name something to be happy about regarding this album it is how everything fits together.

Q: I experienced “Codex” as one of your most intimate releases in history. What is it really all about and how do you perceive this album in the Atrium Carceri discography?

Simon: I try not to explain too deeply how to interpret my works since it will ruin some of the personal interpretations out there and no interpretation is wrong. But for me the overarching theme is how we move between different states of mind and our relation to the reality of the majority. A pretend relationship based on lingual guesswork too primitive to fully cross reference our own reality.

Q: You like to work around ‘concepts’ so what is it all about for “Codex” and how do you transpose a concept into sounds, which become tracks and finally an entire album?

Simon: For me it comes down to justifications of sound within the concept. Each sound should represent something within the concept of the track; ‘cool sounds’ just aren’t enough justification for me. And then the tracks themselves have to be justified in relation to each other, and of course we can’t stop there, the artwork has to be justified in relation to the tracks. The reverse is also true, and going back and forth between everything to re-align/re-edit and adjust until it all fits together takes time. You tweak a sound, and it can mess with the flow of the album, mess with the artwork and the feel of the tracks change and so on.

Q: The music –properly speaking, is important, but the CD-version of “Codex” also features a digibook. What did you try to express by this artwork/digibook?

Simon: I made a decision on this album to not include any vocals in the audio itself, instead the DigiBook shoulders the responsibility with the narrative this time around. A big challenge is to find a balance with the narrative; don’t want too much exposition, but do not want to be overly ambiguous either and me working with art and text at the same time makes this process easier, if a bit more time consuming.

Q: Especially during the past few years you’ve collaborated with an impressive number of artists. What fascinates you in the work with other artists and does it have an impact/influence on your own way of working/composing/producing?

Simon: I thoroughly enjoy to dive into the workflow of other artists and am often blown away by different approaches to creating sound. While I am a very technically inclined producer, I often find myself the most creatively stimulated working with artists on the other side of the coin, true artists like the toy maker Pär of Cities Last Broadcast who has his weird tape-loop laboratory with self-made instruments, or musicians like Bruce of God Body Disconnect, a microphone connoisseur that jazz it out on his drums like it’s no big deal. They blow me away with their skill sets since they are so very different from my own.