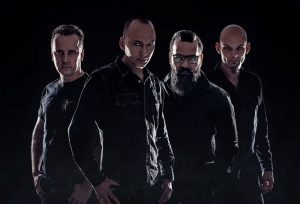 Absurd Minds started in 1995 as a small project featuring Tilo Ladwig and Stefan Grossmann. They got in touch with Francesco D’Angelo (Scanner/Dark Dimensions) and quite progressively the Dresden based duo became a real band and started to release their first official productions. The band progressively gained a serious reputation releasing acclaimed albums. The last work was released in 2010, but seven years later now the band is back on track with the album “Tempus Fugit”, which probably is their best work to date. I got in touch with Timo Fischer.

Q: “Tempus Fugit” is the first new album in seven years! Why such a long break and what happened in between “Serve Or Suffer” and “Tempus Fugit”?

Timo: Anyone who ever has begun to make music knows that it accompanies you during your entire life. There are times when other things seem to be more important. Love, marriage, family, building a house, job… There is no time left, but one day when the desire to make music again awakens, you for sure move back. It took us 7 years to get back into music and now it was just time to break the silence.

Q: I experienced “Tempus Fugit” as a rather classical Absurd Minds-album although you most diversified work to date. What kind of album did you want to compose and do you see some evolutions compared to the earlier work?

Timo: When you start composing songs, you have an idea in mind that you want to implement. You’re use your experiences, technical knowledge and possibilities, as well as musical preferences. This automatically creates something close to one’s own musical tradition. “Tempus Fugit” is therefore a typical Absurd Minds album.

Q: How did the writing process of the new album happened?

Timo: The song writing process can be described as ‘Janus-faced’. This has always been the case and was made clear once again this time. The creating of the music was surely the most convenient part of our work. Writing the lyrics is really more of a sweaty procedure. The art is to manage this ambivalence.

Q: I got the impression that the lyrical themes are very personal, sometimes dealing about very intimate experiences. Can you tell us a bit more about it?

Timo: This time the lyrics are indeed primarily personal. For example the loss of a person has been evoked (cf. “Farewell”), but there also is a declaration of love from a father to his daughter (cf. “Guardian”) or on another song we complain the principal narrowness of the human capacity for cognition (cf. “Threnody”).

Q: What might we expect from the future considering aspects like new songs, remixes, live performances and maybe other music activities?

Timo: We want to continue to work on our project in the future. A few concerts have already been organized for this year. We hope that it will be even more, because we want to play live again. Everything else will develop during the course of this year.