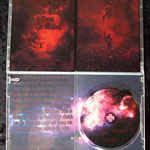 Background/Info: I didn’t receive any information about Clavius and there’s not much to find on the net. All I could found is that it concerns a Spanish new-coming project, which unleashed its debut album during 2016. “Nebula” seems to be inspired by the famous “2001. A Space Odyssey” and other books of Arthur C. Clark. Notice by the way that this CD-format released as CDR in a transparent DVD box is strictly limited to 30 (!) copies.

Content: “Nebula” is an appropriated title perfectly reflecting the space theme of Arthur C. Clark. I’m always wondering how such a subject can be adapted into music. Clavius deals with an extreme sonic format, which is based upon dark-ambient music mixed with noise waves and other industrial sound treatments.

The work comes close to a soundscape or should I say a ‘noisescape’. Most of the tracks are quite long and even going over 20 minutes. There’s a slow progression, which now and then ends into a sonic cataclysm.

+ + + : Clavius doesn’t compose the usual and stereotypical dark-ambient format. The music is more extreme, less accessible and definitely into pure underground. That’s an aspect I like. “Nebula” is a tormented production, which reaches a climax on “Rama”. There’s a kind of nearby disaster atmosphere hanging over this cut. It’s pretty freaky revealing the somewhat visual strength of this composition.

– – – : I think there are several elements that can be improved. The main point that hurts me is the long duration and endless sonic corridors running through a few cuts. In the long run it starts to get a bit to get repetitive and monotonous. “Nebula” is not the kind of work, which is accessible for a wider audience.

Conclusion: “Nebula” is a tremendous experience revealing a tortured approach in dark-ambient music. I’m sure this formation will find a selected and erudite audience.

Since you’re here … … we have a small favour to ask. More people are reading Side-Line Magazine than ever but advertising revenues across the media are falling fast. And unlike many news organisations, we haven’t put up a paywall – we want to keep our journalism as open as we can. So you can see why we need to ask for your help. Side-Line’s independent journalism takes a lot of time, money and hard work to produce. But we do it because we want to push the artists we like and who are equally fighting to survive. If everyone who reads our reporting, who likes it, helps fund it, our future would be much more secure. For as little as 5 US$, you can support Side-Line Magazine – and it only takes a minute. Thank you. The donations are safely powered by Paypal.
Tags: Clavius