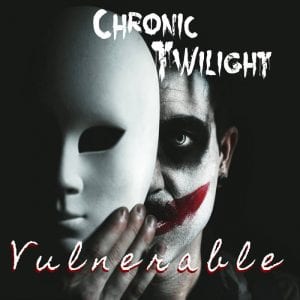 Background/Info: Chronic Twilight is the solo-project from American artist Michael Louis. One year after the debut album “Hymns For Heliophobes” we get 4 new songs released on this EP.

Content: The sound Chronic Twilight is dealing with clearly evokes some good-old 80s souvenirs. The typical guitar playing is quite noticeable at the debut song while low, resonating bass lines inject an extra dark and deadly touch to the songs. The song “Crawl” has something horror-gothic like. One of the main characteristics is the vocals. Louis’ timbre of voice sometimes reminds me of the charisma of Athan Maroulis Spahn Ranch).

+ + + : This EP will clearly appeal to 80s lovers of cold-wave music. The great guitar playing will directly bring you back to this magic sonic decade. I especially like the vocals, which are powerful and revealing a natural charisma.

– – – : The songs are cool, but I’m missing some real noticeable elements. There’s no real highlight among the tracklist.

Conclusion: This is just an EP of 4 songs, but I think there’s more potential in this band than what came out at “Vulnerable”.