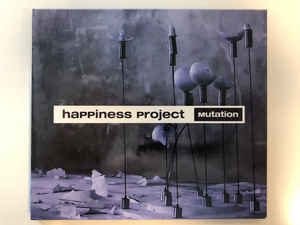 Content: Happiness Project has this typical BOREDOMproduct touch, which is characterized by space-like sequences and a vintage sound approach. Next to the already familiar EP-title song “Big Cities” we can discover new tracks, on which the band switches from harder, body-pop driven songs to quieter and even dreamy-like electro-pop pieces. The tracklist mixes danceable cuts and moody-like songs. There also is a cool twist between male- and female vocals.

+ + + : Happiness Project is a band with a very own sound, which I however directly link to other label mates such as Celluloide and Dekad. But this is something different, sometimes harder, carried by solid bass lines, astral bleeping arrangements, dry snares and a production, which generally speaking has something pretty retro-like. I especially enjoy the harder cuts and want to tip “Sweet Heart Of Mine”.

– – – : I’m less convinced by the softer cuts. It’s not that they’re bad and/or unaccomplished, but Happiness Project sounds more convincing when producing a harder and menacing sound.

Conclusion: This is the first new studio album in six years and it definitely feels like a relief to have this band back with new songs. This is a diversified and fully enjoyable opus.

Since you’re here … … we have a small favour to ask. More people are reading Side-Line Magazine than ever but advertising revenues across the media are falling fast. And unlike many news organisations, we haven’t put up a paywall – we want to keep our journalism as open as we can. So you can see why we need to ask for your help. Side-Line’s independent journalism takes a lot of time, money and hard work to produce. But we do it because we want to push the artists we like and who are equally fighting to survive. If everyone who reads our reporting, who likes it, helps fund it, our future would be much more secure. For as little as 5 US$, you can support Side-Line Magazine – and it only takes a minute. Thank you. The donations are safely powered by Paypal.
Tags: BOREDOMproduct, Celluloide, Dekad, Happiness Project