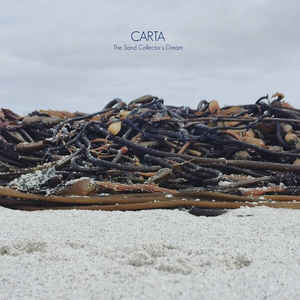 Content: It’s not an easy thing to define and seize the sound of this group. The main characteristic is the dreamy sound of the music while most of the songs feature male- and female vocals. There’s a sweet melancholia emerging from the music, which sometimes becomes a bit darker although holding on the evasive perspective of the composition.

+ + + : Carta has created a very own sound, which is covering multiple sources of inspiration. But in the end it’s something different from established standards. I like the evasive sensation emerging from the songs; which is accentuated by the symbiosis between the singers. The guitar playing is a noticeable element, which can be now fuzzy and then empowering the ambient aspect such as on “The Manuscript”. Some of the final cuts are a bit more elaborated and diversified getting my preference.

– – – : This album also has a monotonous element, the songs being quite similar and without a real climax.

Conclusion: “The Sand Collector’s Dream” is an appropriated title for this melancholic sound voyage. Sweet and moody definitely are the keywords to describe this work, but I can’t say I am fully convinced.

Best songs: “The Manuscript”, “Reasons To Be Fearful”.