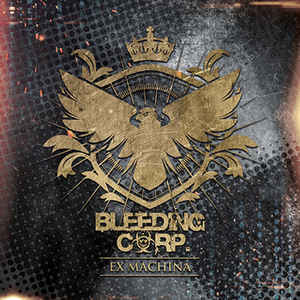 Background/Info: “Ex Machina” is the third album by Ecuadorian formation Bleeding Corp. Nearly 3 years after their previous work also released on Advoxya the band is back on track revealing 13 new songs. A limited edition of this work is also available featuring an extra disc with a few remixes.

Content: The previous album “Infected Sounds” hasn’t really convinced me so “Ex Machina” was a new introduction to the sonic universe of this band. I discovered a rather classical industrial-metal format revealing a mix of harsh and somewhat technoid electronics and heavy guitar riffs. The enraged vocals perfectly match with the sound brutality created by this band. Sometimes reminding me of Combichrist and sometimes moving on the edge of pure hard-core I have to admit this work took me by surprise.

+ + + : A serious improvement in the global writing and production happened and that’s why this album caught my attention. I like the raw electronics creating a great twist with the furious guitar playing. The song “Techno Satanic” is the ultimate cut of the album for its technoid approach mixed with pure metal influences. Bleeding Corp. definitely enlarges the sonic horizon of Advoxya and has definitely accomplished a great piece of music.

– – – : You don’t hear me complaining although it’s clear this band is not reinventing the industrial-metal style.

Conclusion: Bleeding Corp. and Advoxya both took me by surprise. The band has seriously improved different aspects of writing and production and Advoxya clearly appears to be more interested than only signing dark-electro and EBM acts.