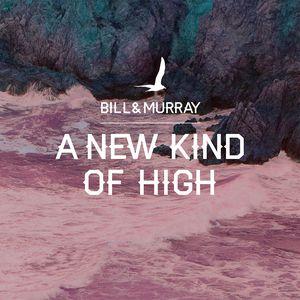 Content: Bill & Murray is a band operating from Tel-Aviv (Israel), which was originally set up as a duo by David Blau (guitar, vocals) and Stella Gotshtein (keyboard, vocals). The line-up was then reinforced by Ran Jacobovitz (drums).

“A New Kind Of High” is their debut full length revealing a fusion between elements of electro-pop, rock and shoegaze. All these influences together are quite compact and sometimes reminding me of dream-pop formations active on the Saint Marie Records roster. I don’t really want to compare this band to another, but I can imagine it’s the kind of sound that will appeal to lovers of Ladytron.

There’s a similar fragile and sexy timbre of voice while the fuzzy guitar parts and electro-pop arrangements are a bit in the line of bands like Ladytron, Fischerspooner and co. But Bill & Murray are more diverse, covering many influences.

The debut took me by surprise, revealing fascinating and accomplished compositions. The somewhat ballad-rock like opener “Simplicity” is a solid teaser while the harder “New Kind Of High” and the more into shoegaze exploring “Bored” are all fascinating compositions.

The next few cuts move into this subtle dream-pop approach, which reaches its climax on “Rabbit Hole”. The last cuts hold on to the dreamy format of this work, but they’re also well-crafted songs revealing a great sonic taste of this formation.

I’m just missing an absolute hit, which would have been an embellishment for this cool work. Notice by the way that the album only features 8 songs which is rather short.

Since you’re here … … we have a small favour to ask. More people are reading Side-Line Magazine than ever but advertising revenues across the media are falling fast. And unlike many news organisations, we haven’t put up a paywall – we want to keep our journalism as open as we can. So you can see why we need to ask for your help. Side-Line’s independent journalism takes a lot of time, money and hard work to produce. But we do it because we want to push the artists we like and who are equally fighting to survive. If everyone who reads our reporting, who likes it, helps fund it, our future would be much more secure. For as little as 5 US$, you can support Side-Line Magazine – and it only takes a minute. Thank you. The donations are safely powered by Paypal.
Tags: Bill & Murray