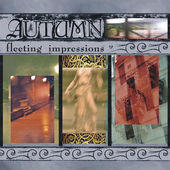 Content: Autumn is back with the final part of their “Embracing Worlds”-trilogy, which started in 2004 (cf. “Sulamith & Maria”) and continued in 2008 (cf. “Eurasia”). Both previous albums were a quite fascinating sonic travel throughout different cultures and musical ideas.

Autumn is not exactly releasing new work on a regular basis, but it’s maybe a pity it took them all these years to accomplish this trilogy. The album is described as a kind of voyage ‘reassembling impressions gathered on the way through Europe, always going eastward up to the gateways into Asia, deeper and deeper into the conflict-scarred border regions between the Western and Eastern world’. Speaking for myself I like this kind of concept revealing a real human and warm attitude about the world we’re living in.

Autumn already accomplished this work with an entire arsenal of musicians and members playing acoustic instruments next to electronics. The instruments inject an authentic aspect to the world, which was also one of the main strengths of their previous work. The music sounds like an offspring between gothic reverie and ethereal passages while the magic of clarinet and cello remain a typical characteristic of their composition.

You feel like you are embarked on a journey visiting different countries and cultures, but unfortunately this element is less explicit as on their previous work and I especially refer to the album “Sulamith & Maria”. The work of Autumn becomes more flat and less passionate although they’re experienced and talented musicians. It sometimes sounds a bit like this trilogy had to be accomplished one day, but I’m used to hearing more transcendental and fascinating work from this band.

I’d to wait for some of the last songs to rediscover some parts of magic. I’m here referring to “Mostar” for its darker aspect and great clarinet playing. I also like the kind of spooky vocals running through this song. “From Piran To Perast” is for sure the absolute highlight for its kind of tribal input, which injects a mysterious touch to the work. This is for sure the kind of song showing the real potential of Autumn, but which unfortunately doesn’t really come through. Even the great vocals of Brigitte Christine Tretter have already been more convincing and passionate in the past. Other vocals have been performed by Mariann Kiss and master mind Thomas Buchner.

Notice by the way that this album features 21 songs. The titles mainly refer to different places in Europe, which often stands for magic and reverie.

Conclusion: I’m glad to see that Autumn is back on track, but this is definitely not their most inspiring album to date, which is a pity for a band with such great talent.