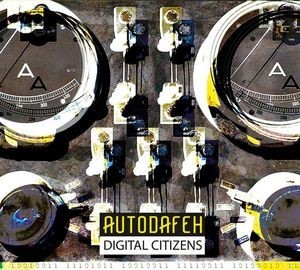 Content: This is album number 5 for the Swedish EBM formation. Autodafeh became a rather prolific combo, but where the qualitative element has been always more important than quantity.

After the outstanding previous work “Blackout Scenario” (2013) I was really wondering which direction the new work would take. Their ‘electronic music for body and mind’ remains pretty faithful to the good-old standards in the genre, but the new work has been introduced as mainly inspired by old synthesizers and drum machines from the 80s and 90s. That’s not really surprising that the trio has been influenced by the early roots of EBM, which often reminded me of bands like Front 242, DAF and co.

So it’s not a coincidence that this work features a cover version of Front 242’s famous and early hit “No Shuffle.” It’s not my favorite song although I’ve to say that the song has been meticulously transformed into the Autodafeh trademark. There only is one ‘242’ and only one Autodafeh! That’s precisely what the band of Mika Rossi shows from the very first notes till the last song. It’s pure body music featuring a modern touch while inspired by the early years of the music genre. The songs are powerful and mainly carried by solid bass lines, elaborate sequences and danceable rhythms. I like most of the dry snare drums, which remind me of the 80s standards.

Both debut songs are pretty cool, but just appetizers for what’s coming next. “Conflict” and especially the title song (which you might have discovered at the previously released and self-titled EP) both are outstanding compositions. This is intelligent body music empowered by raw, synthetic leads and a kind of technoid touch emerging on “Digital Citizens.” There also is a kind of guitar-like electro sound arrangement injecting a misty atmosphere.

The album next moves into rough EBM fields driven by Klinik-al sounds (cf. “Legacy”) till a somewhat dreamy-like creation (cf. “Fatamorgana”), which is more like a kind of break in the midst of furious songs. “No Future” is one of the main ‘old-styled’ songs, which clearly reminds me of the good-old years of Front 242.

The last part of this album (featuring 13 songs) reveals a few more noticeable cuts. But Autodafeh is more than simply an EBM-inspired formation. They also reveal –and confirm, their fine nose for great sound arrangements and impressive sound creation. “Carpe Diem” and “Set Me Free” both are hard and merciless smashers.

Conclusion: I’ve never been disappointed by the work of Autodafeh and their “Digital Citizens” again brings me full satisfaction. This album confirms the growing status of Autodafeh, which belongs to the best contemporary groups in the genre.

Since you’re here … … we have a small favour to ask. More people are reading Side-Line Magazine than ever but advertising revenues across the media are falling fast. And unlike many news organisations, we haven’t put up a paywall – we want to keep our journalism as open as we can. So you can see why we need to ask for your help. Side-Line’s independent journalism takes a lot of time, money and hard work to produce. But we do it because we want to push the artists we like and who are equally fighting to survive. If everyone who reads our reporting, who likes it, helps fund it, our future would be much more secure. For as little as 5 US$, you can support Side-Line Magazine – and it only takes a minute. Thank you. The donations are safely powered by Paypal.
Tags: Autodafeh