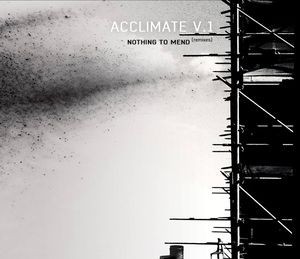 Content: After the “Noise Pigs”-albums (2013) Acclimate V.1 got the idea to give a 2nd life to this cool opus by exposing the track “Nothing To Mend” to the creative remix skills of other projects.
Artemis Kowalski and Phillip B. Klingler can look back on a serious musical legacy so I think it is an interesting concept to leave their last creation in the hands of other sonic projects. I never have been a fan of entire albums filled with remixes, but a few restricted number of bands do it in an intelligent way. That’s precisely what I experience when listening to “Nothing To Mend”, which reveals a platform of many diverse artists. Acclimate V.1 seems to have avoided bands that have a similar approach and influences to their own.

The work opens with the “Original Version” of “Nothing To Mend” by Acclimate V.1, which remains a heavy, but great piece of industrial-noise arrangements and complex electronic layers. This cut was not exactly my favorite one of the album although it’s a cool and representative composition.

We next get 12 remixes opening with the minimal and rather experimental style of Attrition. Martin Bowes created a cool ambient-driven trip. Torulsson transformed the original version into an alluring electro-ambient mix with a cool vintage influence on top. It all sounds pretty minimal-like and that’s also what L’Avenir delivered with a remarkable electro-industrial minded remix.
The track was also reworked into chilling ambient passages and other industrial formats. Time Aversion definitely is a band to mention in the genre. In a harder and power-noise approach I also have to mention the great remix by C2. But “Nothing To Mend” was also remixed in a surprising electro-danceable version by Gunmaker (ex Impact Pulse). There also is the glitch touch of the Chiasm remix.

But the most surprising and truly creative remix comes from Peter Penko (ex Coptic Rain) who transformed the song into a kind of Revolting Cocks-driven electro-industrial piece. This is my personal favorite remix from a great tracklist.

Conclusion: I like the diversity of the remixes, which don’t give you the impression of listening to the same song for more than one hour.

Since you’re here … … we have a small favour to ask. More people are reading Side-Line Magazine than ever but advertising revenues across the media are falling fast. And unlike many news organisations, we haven’t put up a paywall – we want to keep our journalism as open as we can. So you can see why we need to ask for your help. Side-Line’s independent journalism takes a lot of time, money and hard work to produce. But we do it because we want to push the artists we like and who are equally fighting to survive. If everyone who reads our reporting, who likes it, helps fund it, our future would be much more secure. For as little as 5 US$, you can support Side-Line Magazine – and it only takes a minute. Thank you. The donations are safely powered by Paypal.
Tags: Acclimate V.1