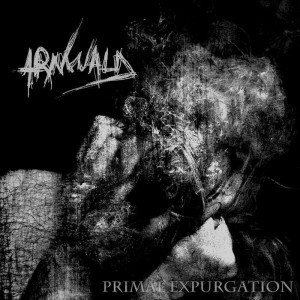 Background/Info: I’m really glad to discover a new Belgian project and a new Belgian label as well. Arnwald is a solo-project that has been set up by a musician who was previously involved as the drummer in several (metal) bands. “Primal Expurgation” is the official debut work of this artist.

Content: Arnwald creates a fascinating and poignant sound, which is clearly inspired by dark-ambient music and accomplished with industrial elements and even noise. The global production is characterized by impressive, monstrous sounds and tenebrous vocals. Industrial drones resonate and increase the freaky ambiance to support this album.

This is not exactly the classical kind of dark-ambient release. There are many sonic manipulations and guitar noises joining in. The vocals are a not important and essential element of the work. You sometimes get the impression that it’s an extra noise input. Globally speaking I would compare Arnwald to the offspring of early Swans and Brighter Death Now.

+ + + : This album is fully accomplished and definitely reveals a creative approach mixing different genres together. You get the power of some early industrial music together with the visionary appeal and chilling atmospheres of dark-ambient music plus a kind of noise-experiment. The global production process is absolutely remarkable and I especially refer to the many overwhelming and vibrating ‘monster-sounds’.

– – – : I think that the dark-ambient element of the work could have been a bit more poignant and scary-like. The main difficulty for Arnwald will be to find a way to get into the picture. A new band signed on a new label is not an easy thing to get recognized.

Conclusion: Belgium is not exactly a prolific country for dark-ambient bands although the pretty few ones that are active reveal great composing skills. Arnwald is a fascinating discovery featuring multiple influences.