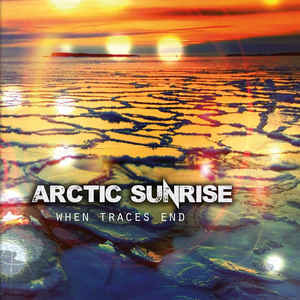 Background/Info: After their accomplished debut album “A Smarter Enemy” (2015) Torsten Verlinden (vocals) and Steve Baltes (electronics) are back on track. “When Traces End” was preceded by the EP “Silent Tears”.

Content: The German duo confirms their promising synth-pop skills. This is a mature and accomplished production opening with the cool “Silent Tears” featuring bass guitar played by Torsten Verlinden. The song is somewhat evasive-like, which is one of the main characteristics of Arctic Sunrise.

It’s a sound you can dream away on while always based on synth-pop music. Several guitar parts (played by a guest musician) add a touch of new-wave music and this unavoidable retro feeling from the 80s. The pop sound is melancholic and even moving into real sadness. I again noticed some links with De/Vision, and I also have to mention IAMX on the final song.

+ + + : “Traces End” is a beautiful electro/wave-pop album. The songs sound like a sweet perfume that leads you into a fantasy world among the stars. Crystalline bleeps reinforce this astral dimension of the music while the melancholic tunes will touch you in the deepest of inner self. I also have to mention the great singing of Torsten Verlinden who’s the perfect singer for this kind of music. This is a well-crafted work revealing several cool songs.

– – – : My single regret is that there’s not what I would call an absolute hit song. “Silent Tears”, “The End Of Things” and “Your Eyes” are all irresistible, but not the kind of hit you’ll play again and again.

Conclusion: Arctic Sunrise is one of the upcoming synth-pop formations, which I’m sure has the potential to really break through if they could compose a hit!