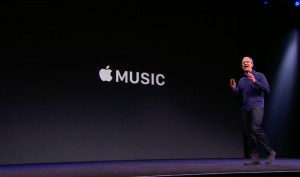 While some artists kept on saying up until yesterday that Apple would never go streaming (hey guys, where have you been the last few years?), the very same Apple announced a brand new streaming music service at this year’s WWDC event: Apple Music, to be launched on 30 June. Price wise Apple goes in direct competition with existing services like Spotify and Rdio opting for a monthly subscription price of $9.99 (and a 3-month free trial). A family pass with six users will cost $14.99.

The biggest difference with other platforms is that there will be no free ad-supported ride in the long term compared to Spotify for instance. This means that Apple Music probably won’t be able taking off very fast outside the richer part of the Western World. The streaming music market in South America for example is heavily relying on ad supported streaming services and there is no way that these people will switch to a paying service (the local economy simply doesn’t allow it). Then again, it’s far from sure that Deezer and Spotify only want to cater to a not so financial interesting public.

The service will also include a live DJ service called Beats 1 with DJs stationed in NYC, London and LA, but it remains to be seen if these will be able to please those in search for less commercial material. Below is a comparison TechCrunch made of some of the current streaming services (surprisingly they added the stillborn Tidal and not Deezer). 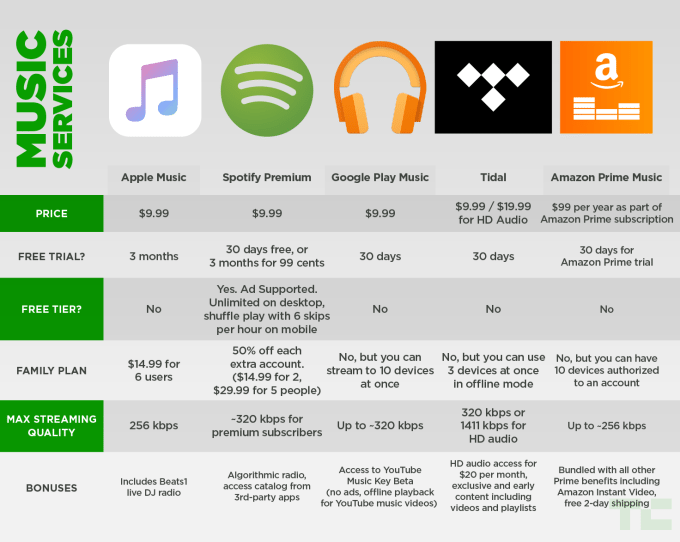 Apple Music will also land on the Android platform where it can cater its service to a vast amount of users. A side-note, Android users usually spend a lot less on paid content compared to Apple gear users so it’s pretty certain that Apple does not consider the Android market to be the most important part of its business, but better be present. After all, despite the very low ROI per head there are more Android users than iOS users.

But much to our surprise, Apple is again trying to go social – under the Connect flag – after the disaster Ping turned out to be (Ping went down only 2 years after being launched with iTunes in 2010). However, instead of a standalone service Connect will pull in all the social media content — from Facebook to Twitter to Instagram — into one portal. Connect’s feed will be yet another tool to connect fans with musicians (I already hear some sighing realising they have to maintain yet another social property.

Streaming has officially become the way to consume music. Like it or not.